Some motorcycles succeed in convincing without forcing their talent, as did the Kawasaki Z750 in his time. Yamaha MT-09 shares this feature of character. Comfortable everywhere without Excel on a point, this 3-cylinder unveiled much strength. The last one tariff canon… 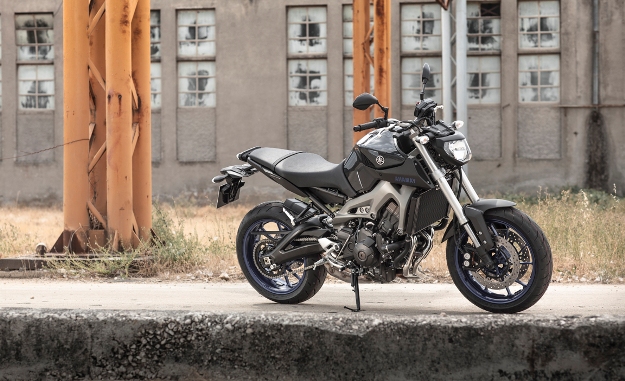 Since the beginning of the 1980s, Yamaha no longer used the 3-cylinder elsewhere than in segments snowmobile and navy engine. With the Yamaha MT-09 2014, the firm reinvests in this mechanics with a bike light and compact, capable of shoving the references of the kind.

If some people are not convinced by the adornment of this Yamaha MT-09 2014, they will be by the part-cycle which is reassuring. The Yamaha is technically well born, and enjoys poking strengths to captivate fans of roadsters fun and easy. The new framework aluminum surrounds a pretty 3-cylinder, which we particularly appreciate the exhaust pipes that wind and the silent short. The suspensions are good size and beautiful arm swing aluminum houses worthy of a sport bike chain tension system. In short, it breathes seriously.

With its height of seat 815 mm, the Yamaha spans at a glance… Add to that a real finesse at the level of the tank and engine and this is what asks without any regard good feet flat on the ground. 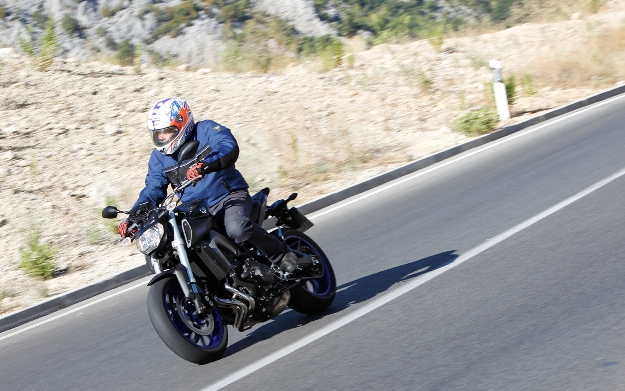 And this engine, how he sings?

The first spark, the 850 cm3 shakes with taste. If idling, clean 3-cylinder sound is not frankly marked, a simple gas call removes ambiguity on its potential. With a short stroke, this engine objects that very little inertia to the outlet of the diet and it is on wheel caps that starts our driving session.

Engine position Standard mode (three maps are programmable to the handlebar), Yamaha MT-09 2014 leapt to each acceleration in a nice hum. However, it is pity that the go-around is often spotted of transmission jerks, even more significant on mode A, more athletic.

Still heavy traffic out of town also gave us an opportunity to engage the softer mode (mode B) and discover that the character-driven change at all in becoming an extreme docility. Note that modes operate on the engine but on the reactivity of the throttle to the semi- electronic draw also. 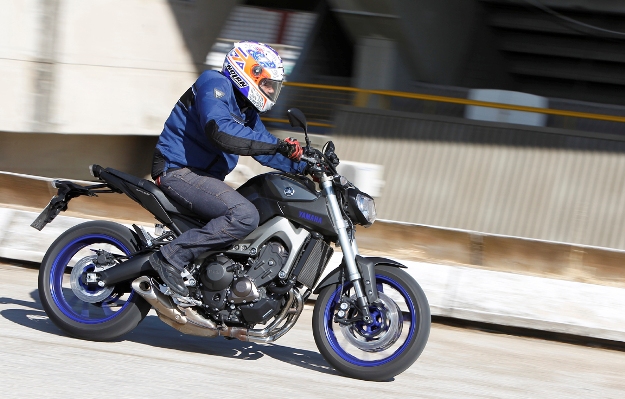 Our new 3-cylinder engine proved flexible enough to resume at 1500 rpm on the fifth report. Its thrust is rather linear but important torque compensates and wasted no time to pick up speed to the crew. The fact of a gear ratio short enough, the engine speed is high enough (approximately 5,500 rpm in 6e to 100/110 km/h). This requires us to often play the selector, including on a winding road, to keep pace. Fortunately, the box is fast enough, even if the selection is shown closed.

This high rotation would it be an impact on consumption? Not really since it has kindly rotates between 5.4 and 5.9 liters per hundred despite the high pace.

Straight! In city, this position makes easier evolutions, but it is necessary to struggle in the handlebar from 130 km / h because the wind rushes generously between arms…

With an as accurate as easy front axle, Yamaha MT-09 2014 fits curve with ease. Despite suspensions relatively flexible (but adjustable), no parasite movement has come to disrupt the chosen course.

Finally, braking, side 4 piston calipers have not shown signs of weakness. Better, they ensured a clear slowdown without having to get excited on the lever.

The new Yamaha MT-09 2014 is not only a fun roadster, and a powerful engine than its rivals, but its price is displayed below the 8000 € 7799 without ABS. Suffice to say it is the most attractive of the moment roadster! While the character of its three-cylinder is not as endearing as the Triumph Street Triple 675 and we regret that the plastic is not more polished without using options. But its high torque and the homogeneity of its chassis may give hard time to its competitors. 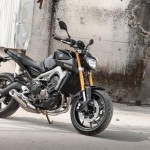 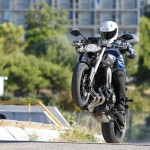 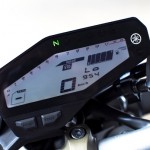 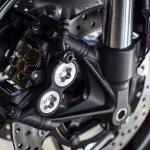 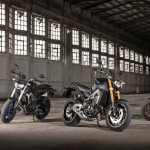 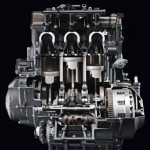 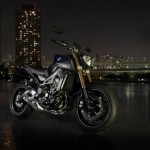