A new Vespa landed within the range 2014: the modern Vespa Primavera. 45 years after its first incarnation, this Vespa to the attractive design retains what was the attraction of the old model. Easy to take in hand, compact and lightweight, it is powered by the latest engines ‘high-tech’ of the Piaggio Group.

More than 45 years after the launch of the first Vespa Primavera, Vespa returns to date this model worship for 2014. The youth icon of the late 60s is therefore a notice on the Paris Motorcycle and scooter Milan (EICMA) back, always offering the same spirit of freedom, simplicity and agility. However, the new model has modern lines, an almost radical design in the legendary brand, but still its timeless features, such as its compactness where the steel construction of its bearing shells. Vehicle vintage but modern, Vespa announces that the Vespa Primavera 2014 is much more stable and comfortable.

Vespa announces that the Vespa Primavera has stylistic choices but also of technical solutions used on the Vespa 946. The ‘Vespa’ will be available in several engines. On the segment 50 cm3, the choice will be between engines 2T or 4t. When at Vespa Primavera 125, it will be powered by the last operator 125 cc air-cooled, wearing a 3 valve head, a thermal group which already equips the Vespa 946 or Vespa LX and S.

It is characterized by its good performance, its low CO2 emissions as its low noise level, not to mention its sobriety. It can be observed on the first pictures, the emergence of a new exhaust silencer. Other info and photos should quickly follow. 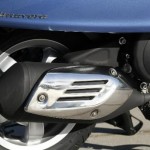 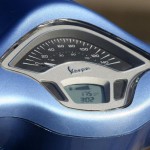 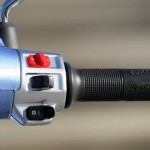 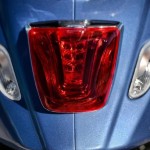