The 2015 edition of Suzuka 8 Hours saw the victory of the Yamaha Factory No. 21, 19 years after the last victory of the firm to the three tuning forks on the Japanese test. Pol Espargaro, Bradley Smith and Katsuyuki Nakasuga have emerged ahead of the Honda FCC TSR and the Suzuki of Team Kagayama. Casey Stoner fell early in the race while the SERT finished top of permanent teams in 4th position overall. 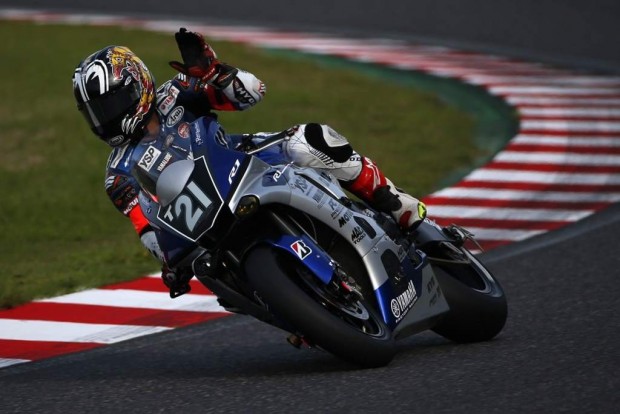 Impressive from the tests with the track record, the Yamaha Factory racing confirmed by dominating his opponents to cross the finish line with almost a lap ahead of the Honda FCC TSR. The pilots Tech3 MotoGP team, Pol Espargaro and Bradley Smith, attended the start of the race given by the actor and motorcycle enthusiast Keanu Reeves while their teammate Katsuyuki Nakasuga slightly missed his flight. But the times the Japanese driver allowed him to gradually return to the race lead. Once in the lead, R1 prepared by the factory has been really worried and it is not a Stop & Go and the many outputs of the Safety Car that changed the game, Espargaro and Smith having ceased up another goal.

We expected the Honda Musashi RT Harc-Pro to make life difficult for Yamaha, but Casey Stoner fell heavily at the beginning of his stint. A stuck throttle problem caused the high-speed crash double MotoGP World Champion who got up with a broken right shoulder blade and left shin. It is another Honda which took charge for the win. Dominique Aegerter and Josh Hook went out of their machine with the FCC TSR, but there was nothing to deal with the velocity of the official Yamaha.

The Yoshimura Suzuki of Kagayama and teams have also been able to join in the fight for victory. But a small drop Yukio Kagayama, driver and team boss, has lost a few lengths in the machine No. 17 also driven by Noriyuki Haga and Kiyonari Riuychi, who finished on the top step of the podium. As for the machine of Team Yoshimura, that’s a drop Takuya Tsuda who wastes time when the mechanics were unable to replace the fairing fairly quickly. The game last night pit stops regime under Safety Car, the GSX-R No. 12 even left 4th place at the SERT Suzuki.

Mixed fortunes for permanent teams in the world championship. YART abandoned after just one race because half hour of an engine problem. The BMW Motorrad France Penz13.com threw in the towel after a fall. Then Greg Leblanc has also suffered a fall halfway destroying the Team SRC Kawasaki. It is therefore the SERT Suzuki who released the great game of grabbing fourth place finish in the final minutes. As night fell and the safety car was out, a last flash refueling allowed him to stay ahead of Yoshimura Suzuki and Yamaha GMT 94 who could also claim the 4th place. Seventh at the finish, the Honda Racing had bet on a gas-saving strategy that does not really pay, especially because of the many outputs of the Safety Car. In the provisional standings, SERT now has 29 points ahead of the Yamaha GMT 94 and 31 on the Kawasaki Bolliger, 12th in Japan. The next event will take place in Germany on August 22 with the 8 Hours of Oschersleben.