The success of the BMW R NINET annoys and Triumph in all likelihood decided to replicate this fall with a pair of roadster / high-flying racer. But in the shadow of a looming Street Tracker bobber which nobody had previously heard … 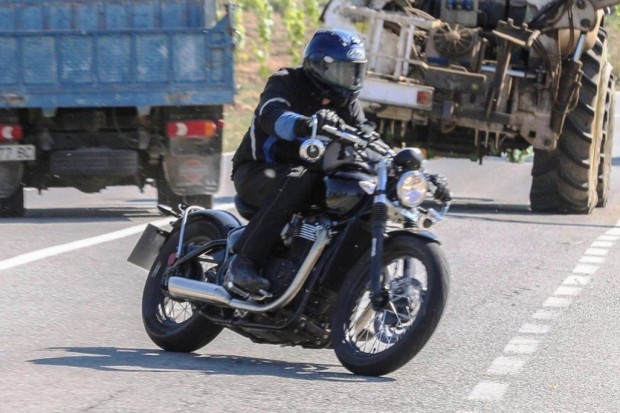 We know for a few months, in 2016 Triumph will unsheathe a range of neo-retro muscular, the Bonneville story out of her pretty bland motorcycle image. And the passage of cutting cruppers the BMW R NINET whose success must stir up jealousies among the British. In fact, we had already seen the dawning roadster versions and future cafe racer twin Hinckley.
But surprise: there is also a bobber in the pipes. And what bobber! Surprised on Spanish roads, the machine promises heavy: large water-cooled parallel twin, rigidly frame with damper and fender attached to the swingarm, central controls, handlebar with little retro “(placed horizontally under the seat?) reversed “… we are at the limit of the preparation hipster approved!
That should not obscure the top harm America and Speedmaster … unless it bobber announced in 1100 cm3 will come “just” fill the gap between light cruisers of the range and the Thunderbird family in September 1700. Response … or not: some sources mention a common marketing 2017. Time to let the Street Tracker overshadow the queen Ninette?