Suzuki celebrating this 2015 because they have completed 30 years of the birth of the Suzuki GSX-R with Suzuki GSX-R750, 1985. Suzuki showed the IFMA show in Cologne city in Germany, with a latest newly and innovative model of motorbike. The Suzuki GSX-R 750 setting a new industry standard for the future of motorcycle racing that began a legacy for the Japanese company. 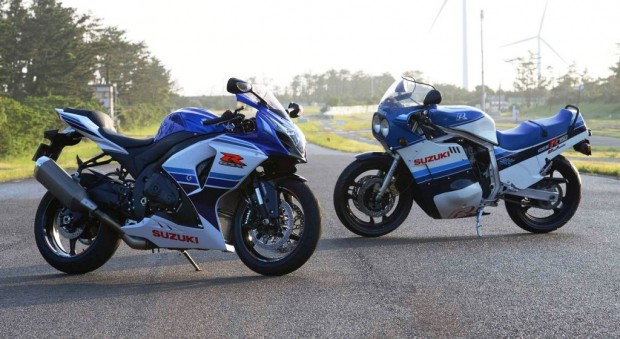 So the Japanese Suzuki manufacturer going to celebrate with a special decoration of the Suzuki GSX-RR MotoGP at the German Grand Prix at Sachsenring, with a especial age 30th Anniversary version of the Suzuki GSX-R street.
Production of the motorcycle Suzuki GSX-R 750 was start in 1985 and the first replica race bike sold to the public, taking their inheritance of the competition, over the years it was upgraded and became possibly the most beloved range of world motorcycles.
For now the details are limited availability, but what is clear is that the rationale for this special edition is to have a decor that mimics the Suzuki GSX-R750 shirt. Therefore dresses in white, black and various shades of blue, without changing anything in the dynamics of the bike.

Suzuki also want to celebrate the return to the top level of competition in the MotoGP World Championship 2015, with the new Suzuki GSX-RR ridden by Aleix Espargaró and Viñales. For the next test will be reflected this celebration on the bikes of the team, with all the clothes and kit that will show the colors of war Suzuki GSX-R 750, with a special decoration which will be released next Thursday, 9 July at the Sachsenring.

Curiously, the Suzuki GSX-R Original revolutionized the market for sports bikes for their lightness and reliability, which is still present in the character of the Suzuki GSX-R 30 years later. Although calls and shouted a new generation has moved seen as competition in the segment of sports bikes.