Suzuki has invited us to try the GSX-S 1000 F on the legendary route of the Tourist Trophy. A unique opportunity to test this new feature in free version on roads all too full power. A trial with a very special atmosphere for efficient but without fulfillment motorcycle on certain points. 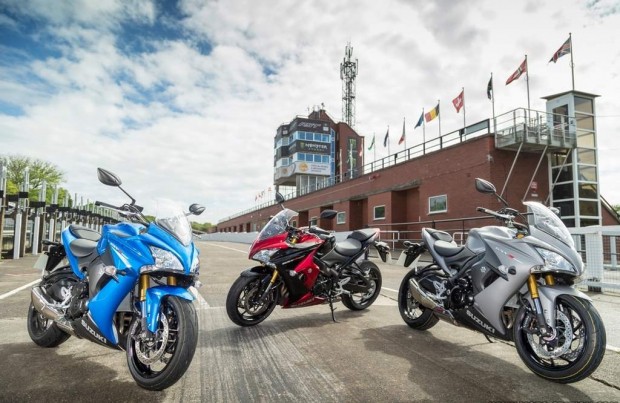 Riding on the Tourist Trophy of the plot is a rare treat, indeed an unforgettable experience in a life of motorcyclist at the same level for some tramp round the Route 66 or the Stelvio Pass. Also, when Suzuki announced that testing of the new GSX-S 1000 F would be held on the Isle of Man, I jumped for joy.

Having had the opportunity twice to ride on the legendary route, I made myself a triple pleasure to return. Excitation with a slight sense of dread when we know that the speed remains free on the mountainous part and an official of the TT marshal, Richard “Milky” Quayle, serve us for Tourist Trophy guide.

But come to Douglas, Guinness turns sour as the airline lost my luggage between Manchester and Birmingham. It begins well. Suzuki then takes me to find makeshift equipment, fortunately almost all my size, that’s something! 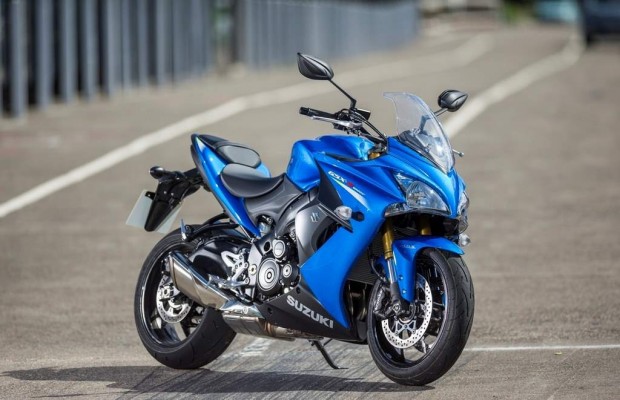 Here we are at Grandstand, the pit lane which is the starting point of 60.72 km of TT. The atmosphere of the race, which took place between late May and early June is still palpable: there is much straw bales around hazardous areas: telephone booths, stone walls on the outside of the turns. Milky gives us information on the course of the day, between driving time and picture / video issues and go. I take possession of my mount for the day.

Having discovered the Suzuki GSX-S 1000 when face to face against the Kawasaki Z1000, I am not homesick. The saddle perched at 815 mm is sufficiently narrow at the arcade at the crotch and not a handicap for my meter seventy. I touch one foot almost flat on one side, it is sufficient in common use. The ergonomics of the GSX-F S 1000 is similar to that of the roadster and that’s good, it is frankly successful: a place for all templates, a well-designed handlebars that does not deviate too much arms and falls bust just right, enough legs unfolded, impeccable. 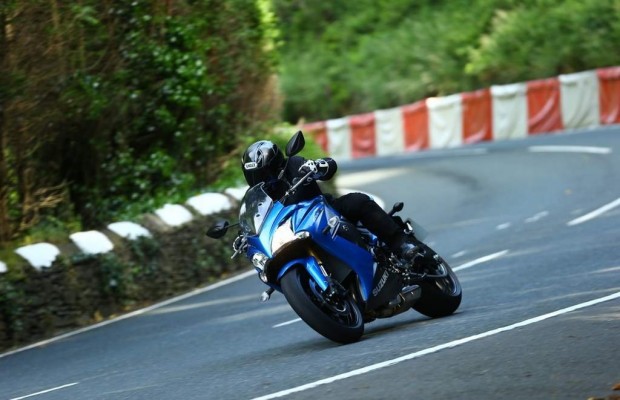 The engine still makes very friendly vocalizations between metallic timbre and furious flight. It understands the origins of this mechanical sport after the GSX-R 1000 2005. Unfortunately, the clutch control is very firm. Furthermore, all controls are easy to use, including traction control, intuitive and quick to adjust. Congratulations to have Suzuki able to design an ergonomic control.

In the first kilometers, at a moderate pace on the descent of Bray Hill to Union Mills, I find sensations known about the Roadster, with an easy Honourable grip that erases much of the advertised 214 kilos fully fueled. A reasonable weight if we take into account the fact that this engine is a little dated and inevitably shows heavier than the latest generation engines.

But we also say that it is in the old pots that one makes perfect and the saying is true here. This 4-cylinder has a significant safe at low speed, with a nice pair of sensation. It is quite round and low midrange and less aggressive than the four-cylinder modern sports like BMW S1000R, climbing quickly in the towers, jumping at every stimulus.

Gear selection is also cited in the positive. However, the jerk to the overshoot remains present and frankly penalizes approval. Less sensitive in this free version of 145 horses strong as the roadster our comparison on French soil, it remains very – or even too – sensitive between 2 000 and 3 000 r / min in second or even 90 km / h in fourth for example. 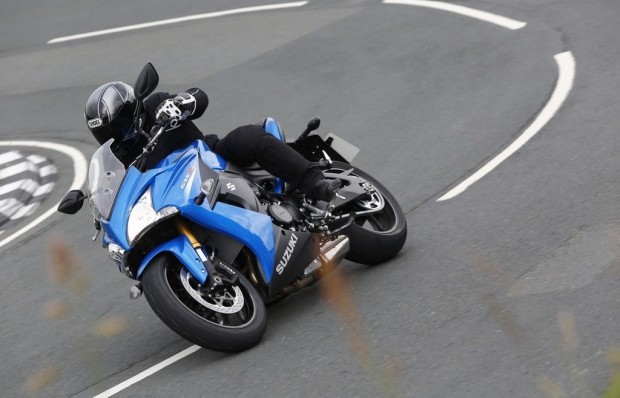 It is a pity that this jerk on the net gas occurs at very usual speeds and regimes … we strongly advise you to check for yourself if this fault appears unacceptable for you or not. Homologated Euro 3, Euro 4, but prepared, this engine may experience an update in the future, in the meantime, feel free to measure its level of inconvenience.

High speed in the fast corners

Leaving urbanized areas, our marshal more open injection meter butterfly and scrolls much faster. At 160 km / h between the trees, the GSX-S 1000 F driver at higher engine speeds, which eradicates the phenomenon to damaging blow. I then rediscovered the route so demanding between Glen Helen and Ballaugh Bridge, where enfilades are linked at high speed, sometimes in the shade of large trees, on a very bumpy asphalt.

The lead-off uneven shedding phenomena of the front axle to approximately 140 km / h, and the quality of the suspensions then gives a cushioning smoothly without the shadow of an early bars shake. Certainly, the pace has nothing to do with that which is capable John McGuinness, living glory of the modern TT, but still, serenity handlebar is impressive.

Switching to Ballaugh Bridge: our little pack jumps on the bridge momentum – a low-speed easy jump around about 45 km / h – but we can not stop there for it to take photos and videos, what a pity zap postcard TT! We set off at a good pace and, on balance, the weight added by the fairing on the front axle is beneficial. 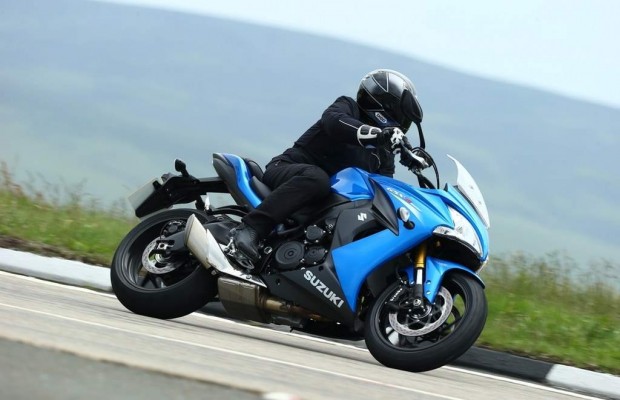 It gives the GSX-F S 1000 a surplus of stability and removes perhaps an ounce of agility and nervousness compared to the roadster. The brake, identical in all respects, is very pleasant in terms of intensity and dosage. The ABS remains transparent in most cases.

We then tackle the mountainous part and the course completely changes of scenery. Urban areas and forests give way to a rather steady ribbon of asphalt, a visibility that far enough and often open door turns. Almost no or slow turn and closes. The rate still rises a notch and the cycle part of the GSX-S 1000 F shines again in its rigor.

Like the roadster, even better, the compromise between agility and stability is entirely appropriate. The accuracy of the front axle is always impeccable and we discover a powerful motorcycle at high speed, always with a guide and a nice healthy option of flying to improvisation. 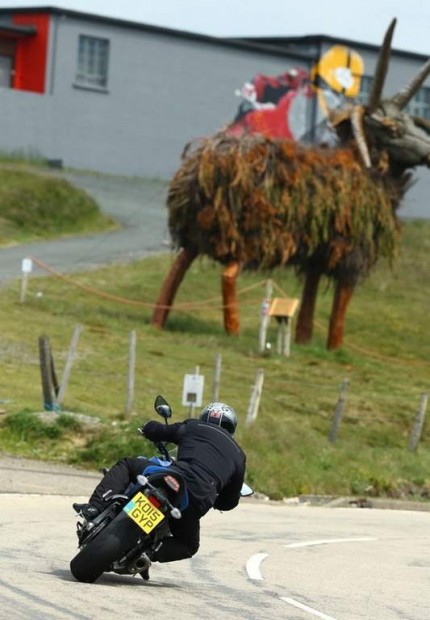 Finally, in terms of performance, the Suzuki GSX-F S 1000 is not very far from a supersport to it 10 years ago – when the bikes with a traction control were not legion – while offering a much more relaxed ergonomics.

We spend Greg Ny Baa and its famous pub and we are heading towards a more Grandstand wrapped look. As for comfort, a saddle and suspensions fulfill their role. The protection offered by the non-adjustable bubble is real to my meter seventy, but the biggest complain. Especially as my shoulders were not spared either.

Impossible not to think of the natural rival of this Suzuki. The Kawasaki Z1000 SX, sold € 13,399 plus 800 € pack tourer for well-designed suitcases, proved more versatile on the protection of chapters, welcoming passengers, practical aspects, including the wheel Rear shock absorber adjustment.

Although Suzuki denies it, saying that the bike remains sportier positioning, it is difficult to understand that the manufacturer Hamamatstu has taken care to measure differences with the concurrent Akashi. True, this does not diminish the dynamic qualities of Suzuki GSX 1000 F-S € 12,599 or € 13,099 with ABS and intends to position dressed in sports roadster in the Suzuki range. 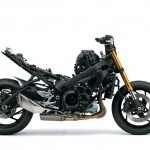 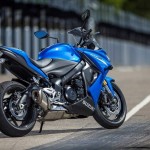 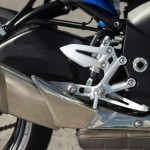 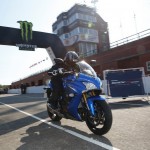 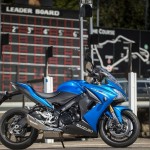 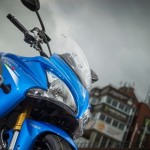 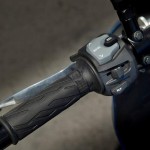 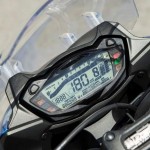 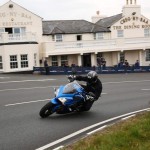