A look at the weather, and started the next direction Troyes to try this 4-wheel scooter so much expected. A world exclusive which we are proud! Two years ago that we expect this day where we could finally judge if this fourth wheel on a tilting scooter changes everything or if this is just a marketing argument. But in fact, is this Quadro4 still a scooter? 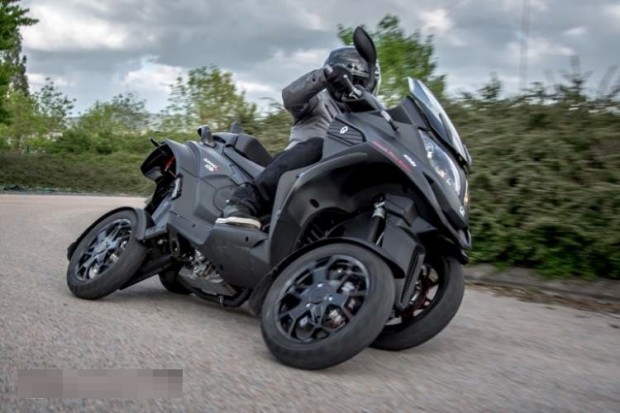 Try a 4-wheel in Troyes, is original, right? The Quadro4 has nothing of comparable or 3-wheel as we know it, reclining or not, the quad 4-wheel or automobile. Mobility still enters a new dimension.

It is there, in its Matt Black livery, imposing, and an air of undeniable family with the 350S which it takes up the whole front. Only an eye will make the difference in this respect. In contrast, at the rear, everything changes. It is more modern, more massive to enclose the two rear wheels. But immediately talk legislation. This scooter is classified in the category of the L5e, as the 3-wheel as we know it. Indeed, the spacing of the rear wheels is less than 425 mm and therefore they are considered not doing that. Therefore this Quadro4 remains accessible to the licence B over two years in completing the formation of 7 hours, as for the 125. This status thus opened to him the same Royal tracks as the Piaggio MP3, with a wheel more history to seduce more this customer car, even more reassured by the fourth wheel.

Do everything even a quick tour of the owner before leaving on his handlebars, even if the urge is urgent. This is useful because the Quadro4 nevertheless changed since the Milan Show in November 2014. There is a general increase in finish and many parts that have evolved. Hydraulics was modified with a higher pressure (21 bar) in suspensions. Rear arms are also different with turnbuckles for belts and the larger hubs. The rollover take place to improve the aesthetics and make it a series engine and either a proto-lounge. There is also a larger brake calipers.

The seat height is accessible to 770 mm, 10 mm less than on 3 – wheels, but the saddle is a little wider, so we ask just flat feet on the ground. Except that it will be useful… Because this 4-wheel, fits right alone! Initially, we keep the reflex of the foot on the ground at the stop but we will lose it quickly. The position is the same as the 3D with a saddle more comfort which has an adjustable backrest. Under the eyes Finally, instrumentation worthy of the name, which was lacking in the 3 – wheels brand. On the Quadro4, Rev counter, meter, engine temperature gauge needle and digital window with watch, totalizing, original and outside air temperature gauge tank with 5 hex pictos. It adds many lights: gasoline, opening trunk, engine failure, battery, but also parking brake and block suspension. In this regard, small change compared to the 3 – wheels. The lever to the apron does block the suspension. The parking brake is relegated on the side of the saddle and plays also the function of lock with pieces coming directly fit in pierced them the rear discs GHG. Well seen!

The passenger features foldable foot rests and a good footing. Two handles are there to be held, but the angles of the backsplash annoy a little. At the rear, the Quadro is already scheduled to receive a tubular racks to install a top-box that will accommodate a second helmet because the trunk houses only one inverted. This chest, located under the saddle part passenger opens from the contactor assisted by two cylinders. Lit, it integrates a small mound equipped with a 12 volt outlet. At the rear, we appreciate the big tail light led. Side shelves, found on the front two closed housing that already had on the 350S, the glove box lower also receiving a 12 volt outlet.

BETTER PERFORMANCE THAN THE 350S

Okay, it’s time to leave. Getting started with a beautiful sound of exhaust. Muffler takes place between two rear wheels in the Middle, thus giving the craft a symmetrical aesthetic. The engine is a real surprise. Indeed, the first Quadro4 announced 500 cm3 and we were all skeptics about the mounting of the motor of 350 S. But it was not counting on the work of the engineers who have transfigured the block single cylinder 346 cc. Only the top engine is preserved and again with a new mapping for greater flexibility and a different camshaft. The gain is 3 horses at a higher engine speed of 500 laps, the Redline at 8200 RPM. On the other hand, torque decreases 4 Nm, but is available on a much wider range. There is also the absence of vibrations.

All housings are different with the installation of a double pendulum balancing, and a second guard separated with the Variator and the rear differential. It is here that we find both drives with toothed belts. On paper, it said that this Quadro4 may not be as effective as the 350S. Well it is quite the opposite! It accelerates better, and clearly, despite 50 kg more to ship. And even the top speed is better. That’s the bonus therefore. Quadro justify it by better penetration in the air thanks to the wider than back on the 350S and a different gear that allows to optimize the maximum speed. With 138 km/h chrono, it would have this block also on the 350S… The fuel tank is also larger (15 liters instead of 13) and its more accurate gauge through positioning and shape more ergonomic.

An engine it is, but also that the chassis is at the height. The Quadro4 opens a new framework with a totally hydropneumatic suspension. The pressure is passed to 21 bars to reduce the risk of mixing air with oil. Initially, our Quadro4 showed only 20 km and the suspension was firm and wayward. The first turn was hard to take. I couldn’t turn and the gear has expanded the trajectory. Perhaps it came from me? Is there an instruction manual?

Over kilometres, gradually take the measure of this Quadro4. Do not seek to tilt it, as can be done with a motorcycle but simply to turn the wheels. Then it becomes easier. He alone look effortless. Late in the day, after 100 km passed to the handlebar of the Quadro4, click occurred, a little rehearsed suspension facilitating everything. A new world opens. Patterns of turns occur quickly, without effort, the Quadro takes a crazy angle and one feels even the differential Act on uncertain coating bitumen if it delivers too much curve exhaust gases. It is stunning: there seems to no longer be in contact with the ground and a finger is enough to turn. We surfed in some way on the road, with great stability. Suspension HTS are closed, we can feel the bumps and holes, passages but the saddle compensates and especially the trajectory remains unfazed. A feeling that one had already on the Quadro 350 S, but with a train back who won sometimes. Here, nothing… It goes with an even greater angle, because nothing is likely to rub. This scooter takes until ‘ to 45 ° heeling!

The handling is still correct, and turn-arounds are same more affluent than on 3 wheels; CA tourne shorter while the steering angle is the same. Need to be actually two equipment in direct confrontation to see the real difference.

A REVELATION, BUT FOR WHOM?

A revelation, this Quadro4! A hundred kilometres are enough to make it fun and very pleasant. Mad efficiency even. We finished our test around a roundabout impregnated with fuel and here too, it is stunning. Full angle, one can let go of the handlebars and driving with one hand both this Quadro4 is easy to place and insert curved… Ditto for braking tests. If the levers require a little force, the pedal provides a unknown stopping power. By insisting until it is locked, the rest Quadro online with a perfect distribution. All four discs are also operated to the left lever, the right acting only on the front. As the Duro tyres, they are identical on all four wheels, with 110/80 in 14 inch installed on of beautiful alloy wheels painted in black Clearcoat. 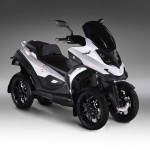 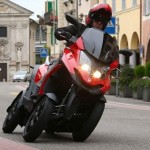 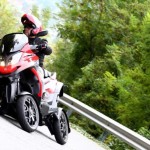 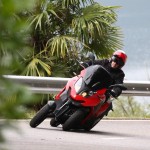 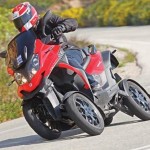 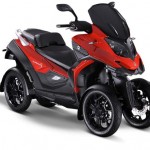