Yamaha and MBK come to present the Nmax and Ocito 125, two twins that arise in very serious competitors of the Honda PCX scooter segment urban low cost premium. With the ABS’s series, they themselves still somewhat above the best-selling Honda for a fee which should be only slightly higher. 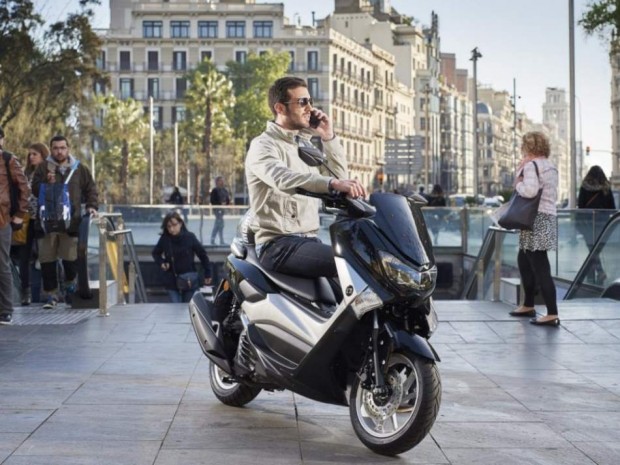 Yamaha is therefore on the front of the scene from the light and accessible urban scooter with the Nmax whose project was launched in 2011, a year after the release of the Honda PCX… He replaces advantageously Majesty S released last year and that has not found its audience, the fault of a slightly overvalued rate. After survey of European and Asian users, since it is a ‘global’ product manufactured in Indonesia, the specification focused around a challenge: combine a number of contradictory requirements to satisfy the greatest number and including beginners, while respecting the spirit of the brand to the tuning forks. This new model has to be both sporty and chic, compact and spacious, agile and stable, with a little greedy and energetic engine. Four years later, here it is. Successful bet?

THE YOUNGEST OF THE MAX FAMILY

From the point of view of design, it is clear that the Max range is not to be ashamed of in its midst the newcomer Nmax. Between the boomerang way alu brushed sides, the shape of the saddle and the front that resemble elements of Tmax and Xmax, nothing to say, we feel very clearly parentage, with a sporty style that does not have the PCX. The leds are of course in the program backwards as forward for the high beam and pilots. Question finish, some visible screws that could badly aging tarnish not really the quality of the ensemble. No floor pan but a beautiful central tunnel well put, running boards along the deck to move feet and the passenger footrests fold, a basis for reasonable height (765 mm): ergonomics fit all and the great are not bothered at the level of the knees. Weight 127 kg contents all full fact is an ally on a daily basis, especially for the smaller templates, hands is instinctive, and adjustable driving position guarantees comfort.

The all-digital dashboard LCD led-backlit screen, like a little than the Neo’s / Ovetto, is minimalist but many clearly legible information exemption: gauge tank segments, econometrician in km per litre at segment also (a gadget?), totalizing, 2 partial trips, instantaneous and average conso, maintenance indicator… Above, the witnesses of use, with the appearance of the ABS. The handlebar controls are reduced to the essential, the Nmax doing the impasse on the warning and the appeal of Lighthouse, damage. To the apron, a not closed pockets deep enough to drop a bottle of 50 cl. With regard to the trunk under the seat retained by a spring, opening to the contactor, it accepts a good size jet helmet but it takes place it upside down, Cap down, because the wrong side of the saddle is not dug to adapt to the rounded shape of the helmet. As the bottom of the bunker is not carpeted, it can cause some scratches… We have not checked with a full but this should pass provided that it is not too large. Rain pants and trinkets will also find place.

To improve the carrying capacity, the installation of a top-case will require the addition of a door-package a bit unsightly, which will take the place of pretty handholds of the passenger. A high windshield is also available among the accessories to offset the lack of protection of small jumps-wind origin. From this point of view, this is normal, the Nmax is not a GT…

The Nmax inherits a new engine 125 cc 4t, 4-valve, liquid-cooled designed in respect of philosophy Blue Core of the Group (as on the recent small sportsbike R3). Clearly, a compact, economical but lively small-displacement engine, way eSP Honda PCX. Like the latter, it adopts a radiator in lateral position, left, for purposes of compactness. In this case, the mono cylinder misaligned, forged piston and low friction coating DiASil develops 9 kW (12.7 HP) to 7 500 rpm and boasts a maximum torque 11.7 Nm to 7 250 RPM. And, first on a scooter, this engine shows a variable distribution system. Baptized VVA for “Variable Valve Actuation”, it acts on the opening time of the two intake valves through a mechanism that switches between two bosses of the cams according to the engine speed at 6000 RPM in this case. The goal is both to get better performance for all plans, but also to reduce consumption, in addition to an optimized injection. For maintenance, the drain is recommended every 6000 km,replacing the belt all the 18,000.

Yamaha announces a range of 300 kilometers with the 6.6 l of the tank due to a less consumption of 2.2 litres per 100 km in the WMTC mode. During our test during the presentation in Lisbon, we traveled 70 km approximately, and the segments gauge indicated having consumed one-third of the tank, dashboard displaying an instant conso of 32.3 km/l, 3.1 l / 100 km for a range of 210 km. Knowing that we have come a few km at bottom on fast track, where could we see a maximum speed of 120 km counter slight downhill. Not bad, and in particular better than the PCX, that we will confirm in a duel soon! Bright and responsive to low- and mid-range, with a little a little rough at the Yamaha character, this engine retains a beautiful will amount in the rounds and begins to falter that after 100 km / h. good enough to take the 127 kg of scooter, this engine, silent at the start, was quite voluble to the acceleration, one more element that confirms his sporting legacy.

That does not deny its chassis and the cycle part! Well rigid tubes of small diameter steel frame gives to the Nmax behaviour above all suspicion, whether on changes of angle or at high speed, well assisted by 13 inch wheels with tyres (the very good Dunlop Scootsmart) large enough for the template (110 mm at the front, 130 mm at the rear). Train before precise, agility and vivacity to the appointment with a short turning radius, rigor of suspensions that do not demerit side comfort (but the two shock absorbers are not adjustable): one is dealing here with a rare quality for the segment level. Especially if you add the braking with ABS series! Both front and rear 230 mm discs pinched by their brackets 1 piston do not figuration. Power and efficiency are at the rendezvous, well dosed at the front, and the back shows even quite likely with a bite delivered which does not regret the anti-lock… It is there raises promptly, with a nice little lever return, while the rear wheel hand slightly in gliding. Nothing well wicked. 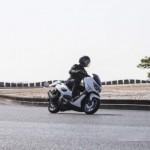 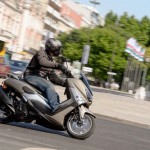 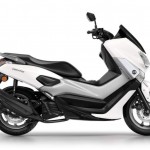 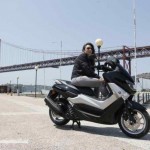 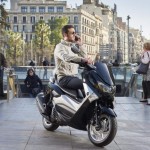