A courier, couples ‘run always’ or countryside doctors, the diversity of the owners of Deauville is sufficient to highlight its qualities: versatility and strength. Able to lead to the office every morning, as much as to make you discover new horizons on weekends, this bike swallows the kilometers like no other in this displacement.

However, mini Japanese GT (in fact a true road to trend GT) was not free from defects, starting with a twin engine distorted over the years by self-centered standards. It is mainly to remedy this lack of character that the first world manufacturer reviewed its copy.

Engineers also took the opportunity to modernize the cover and improve the ergonomics of this average displacement. Although the general appearance is classic, the Deauville still abandons its chubby curves for more taut lines and air volumes which give a small boost to his fork up and wrap-around head. Its flanks and suitcases redesigned clearly refine the silhouette that appears to rely now on the CBF style. Well spotted, the Deauville retains its two side fins (hiding tubular protections) that minimize damage in the event of falls at low speed. The Japanese firm is also inspired by criticism by the owners to change the ergonomics of the bike in the right direction (read also the maxi test of the Honda 650 Deauville). Lowering of the saddle (790 mm) height and side panels thinner at the level of the crotch, enhanced handlebar 3 cm, elongated mirrors stems (+ 5.5 cm), new instrumentation fuller, a host of small details makes life easier on board. Emphasis has also been ported on road capacities of NTV which now hosts a bubble adjustable in two positions (17 cm of extension in height). Certainly its handling remains a bit tedious, but this setting has high less deserve to be possible. Two integrated suitcases are growing also in volume (+ 10.6 l in total) and are now linked together by a central tunnel that allows to carry long objects (about 60 cm). If the release is performed by a single lock, it is a pity that his bags are always not detachable, so that most of them (27.4 l. right) did still not swallow a full-face helmet in its standard configuration. It will take to this turn to the “large volume” covers or the box top, all three offered in the long list of optional equipment. In the same way, we hardly forgive the absence of tabs for tensioners, yet very useful on a motorcycle road-oriented.

The ride in a new light

Béquillée front our hotel located in edge of sea a few miles from Athens, the Deauville just waiting for his driver for surveying the Greek coastal routes. If the articulation and debequillage phases require some attention and a good first saw the 236 kg of the beast, the driving position proves to be very pleasant. Soft and in ground saddle leaves a large space pilot and the legs are not too folded. It was already a great over the 650, and on this point, the 700 fails not to his reputation. The Deauville offers a “touring” position still also Royal! The first rounds of urban wheels however highlight the lack of smoothness of Japanese twin. If the transmission by tree proves to be relatively gentle, the engine knocks severely at very low revs and this despite the adoption of the electronic injection. It is therefore difficult to resume in 4th or 5th fewer than 3 rpm, therefore, resolve to use the box, which is rather nice. There is an also significant vibration in the handlebar, and to top it all, a little intoxicating melody, that reason in the helmet in the long run. Short, there has been a more relaxing city chromed and I must admit that this new Deauville disappointed me on this side there. Fortunately, the small road makes up for it as soon as the horizon emerges. It is at this point that we feel all the benefits of 33 earned cm3 and major engine modifications. Unlike previous vintages that remained very linear over the range of regime, the new version offers a beautiful flight between 5 000 and 7 500 rpm (but!), with the actual sensations of conduct key. Talk about sporting ambitions would probably exaggerate with a maximum power not exceeding 65 c. But this Deauville undoubtedly gains liveliness in his regime mounted. Thus, she shows desire when we play in the second half of the tick marks on the tachometer while the endless numbers of the Greek coastline parade under its wheels to very good rhythm.

It puts you in confidence

For its part, the cycle part stays very close to the latest models known (from 2002). The Deauville 700 adopted essentially a new fork and rear suspension adjustment device (preload) more accessible. But most importantly, if it retains its coupled braking CBS, may this time decorate an ABS anti-lock option (& 600 euro ;). Backpackers as much as those in urban areas will be sensitive, while despite its weight increase of 9 kilos, the chassis remains very healthy and above all comfortable thanks to the flexibility of the suspensions. Apart from stops at lights (and the bequillages), this overweight is barely felt, while the very reasonable width of this bike allows to easily sneak between the cars (watch in the mirrors anyway!). Braking is biting at the front and reassuring at the back, ideal behavior for confidence in the city. In more intensive use, the small GT Honda plunges naturally bend, also thanks to the reasonable width of its tires. The wheelbase and good grip at the Bridgestone BT020 offer also reassuring stability that promotes catches of angles. Even the ground clearance is limited by the concept of the machine (this is not a CBR!) is sufficiently generous to avoid systematic friction in the tighter turns. In contrast, NTV does not like to be prompted. Fast driving can be considered provided they adopt fluid paths and avoid braking in support and other changes of direction too violent under penalty of feel the machine is disunity. This is the reverse of a geometry-oriented “touring” which promotes comfort rather than rigor. The maximum speed is anyway not very high (approximately 190 km/h meter) and can at least enjoy excellent protection. In high position, the bubble houses effectively the top of the body, while in the low position it fails of course more the driver without so far generating too much turbulence (at least for my 1, 78 m). The duo is considered also with equanimity, as much for the driver to the passenger who, despite a somewhat limited in comparison to the space reserved for the driver, can count on huge grab handles and foot rests that position the legs in front and sufficiently relaxed. 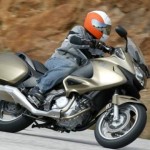 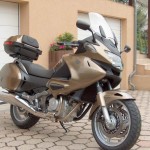 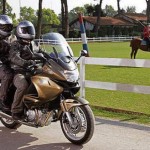 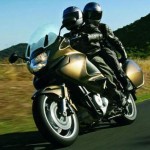 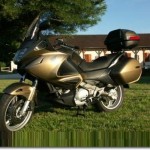 For FeedBack Join Us: