In last end of the week, bikesdoctor was invited by MV Agusta to the presentation of sound very new sporting model, MV Agusta F3 800. Esthetics of dreamed, promising data sheet and layout of world scale to test the jewel of Varese: you think well that one was not made request! 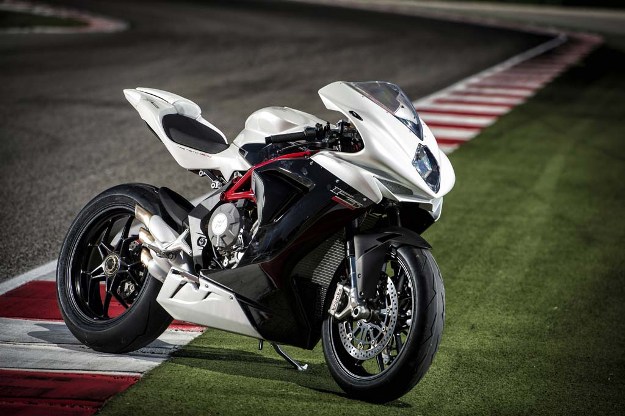 Do you like sporting beautiful and powerful ones? Would you crack well for MV Agusta F4 1000 but do you think of not being with the height to control its engine of fire? Does F3 675 try you but are you afraid which it lacks a little couple? No the problem, there exists now the missing link: MV Agusta F3 800. This motorcycle promises to reconcile best super bike categories and super sport. The marriage does it function T? Let us check that on the layout of Misano Adriatic, in Italy. 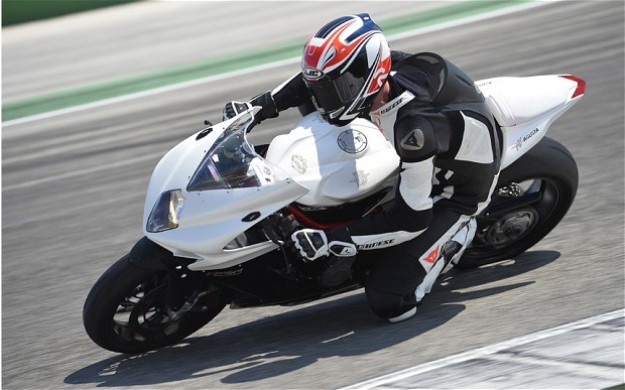 When one finds oneself in the presence of this motorcycle, the genius of the Italian design jumps to the eyes. Some is the angle under which one looks at MV Agusta F3 800, it is simply splendid. Even if this silhouette starts has to be known, it continues to make effect. And what an effect! Moreover, the completion is in rise even if there remain still certain details to be polished like a box with fuses placed randomly or some unpleasant sons held by not less unpleasant necklaces. The quality of paintings and the assembly are more than correct.

Once saddles some, one rocks in the world of sporting without concession. Pique forwards, one must go to seek the half rather low handlebars but the court and narrow tank do not oblige with too much lengthening for as much. The height of saddle makes it possible to pose well the two feet on the ground, operation facilitated by the exceptional smoothness of the 3 cylinders to the between-leg. The footrests are of course perched high but not too, and the legs naturally come to marry the notches of the tank.

By seeing the form of the bubble and his cutting for the helmet, one says from the start which one can forget any concept of protection and comfort. The suspensions and the saddle are with the endorsement: farms. The gas blows at the dead point reveal a non-existent inertia…. Here are which promises one crowned promptness; more especially as the electronic handle of accelerator, whose operation was re-examined, is very flexible and draws really short… Virile clutch, first and it left for a turn on the Italian horse-gear. 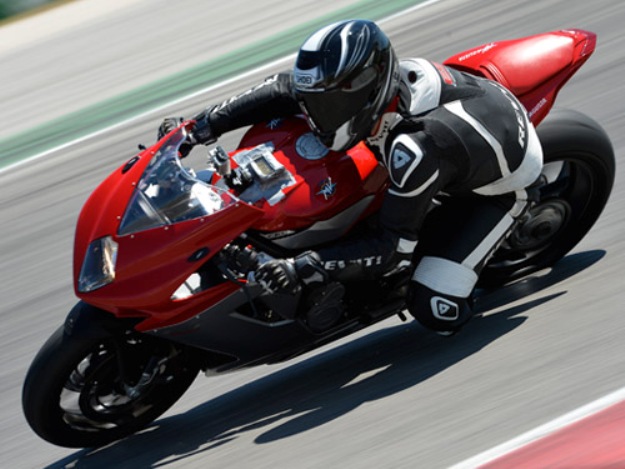 The layout of Misano Adriatic, which accommodates each year the elite world speed, is complex and technical. It is necessary to still roll and roll to start to take pleasure and to go quickly… just like with MV Agusta F3 800! At the beginning one understands nothing: the motorcycle is stiff, struggles, does a little what she wants and does not put frankly in confidence.

If one adds to that a stiff gear box, a shifter with the violent cut, traction intrusive control because of a suspension postpones too flexible, and an engine which sends to you in the Jupiter suburbs in the event of insistence on gases at exit of curve… the first session finishes almost with relief. Do not think of domesticating MV Agusta F3 800 of outset, it is a waste of time and effort! I believe that she does not like me, this MV Agusta…

Of return in the bed I ask for some modifications on the suspensions, adjustable in all directions. The shock absorber Sachs does not seem however to have one big leeway and its hydraulics is almost closed has bottom. I also benefit from it to limit the action of traction control (disconnect able) by choosing level 3 out of 8 possible. A little water – large sun and 27°, one saw worse like conditions of rolling – and it set out again. 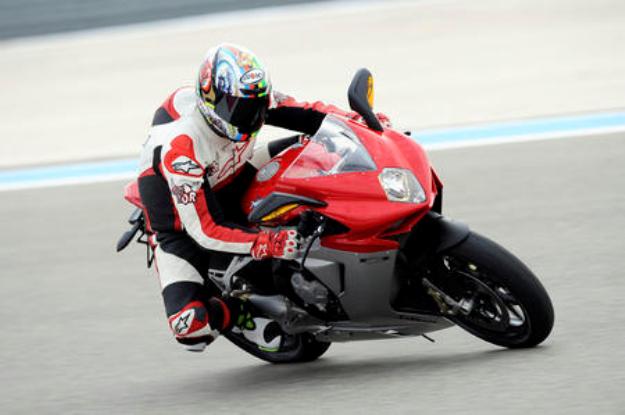 With the sons of the turns and sessions, once the comparable instructions (what can take time more or less), the magic operate and reticent MV Agusta is transformed into monster of effectiveness… if you have a physical good condition! This motorcycle is controlled with all the body and requires a certain implication. Forget the movements of handlebar; you must firmly impose to him your directives with swaying some, under penalty of undergoing it.

MV Agusta F3 800, equipped with a nose gear very stable, then plunges block and with speed towards the point of cord like a predator, and holds its trajectory without stumbling even if one must force there a little. At the time to screw the right handle, it catapults you forwards with a consequent force on the mid–modes, sometimes causing small movements of direction because of the lightening of the nose gear and of the absence of shock absorber of direction of series.

The hardened shock absorber boxes now best the load of the 3 cylinders and motor coach correctly, not starting little or more the traction control whose operation is very soft to see transparent. The more so as no diode with the instrument panel informs you of his action. The accelerator wrinkles by wire made progress and does not suffer any more jolts on the phases of weak load. Just it was noted once or two a delay with the cut of gas, can be more the fault with ultra short pulling that with a true electronic problem. 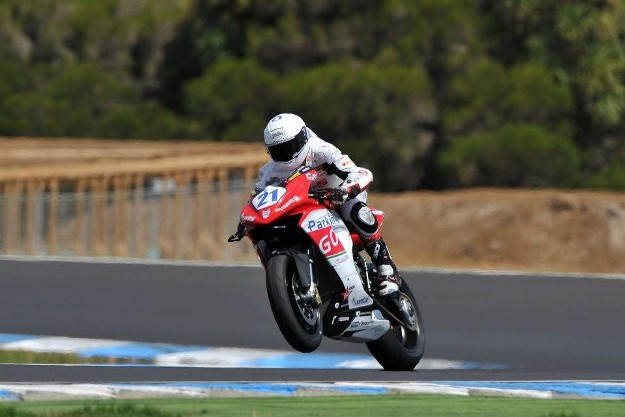 A phenomenal braking… and not assisted

The revolutions per minute and the reports are connected, and the surly gear box remembers to my big toe. Damned, what a hardness! The passage to the fourth report poses a true problem and it is necessary to be begun again there at several times, with or without shifter, to engage it. My colleagues will confirm me to have same the worries. Liquid crystals indicating speed ravel while the pilot formed a unit with the tank in order to save its cervical.

I did not count but promised 148 ch. all seem to be there, and in full form… The block gallops quickly and has a comfortable, useful lengthening-piece “to wait” between two curves as it is the case on a portion of the layout of Misano. However its true beach of use seems to be into 5,500 and 12,000 tr/min (for an interrupter placed at 1,500 turns higher), is a rather comfortable interval.

With the reference mark, I catch the handbrake lever… not too extremely. Brembo monocles offer an absolutely phenomenal power and do not have any sorrow to stop 173 dry kg of the last MV Agusta. The corrosive one is not exceptional (such an amount of for wet better, MV Agusta F3 800 not having ABS…) but the feeling is good, just like progressiveness and the endurance. One can thus adjust braking with the microphone-hair.

The fork, so progressive, plunges and works on its entire race while the tire is crushed and that the back of the motorcycle sweeps the track. The arms must box an important deceleration while the legs try to contain the rest of the motorcycle. The train before MV Agusta F3 800 seems welded on the ground and the information returned by the Marzocchi fork is good. Pirelli SuperCorsa SC1 assembled for this presentation deal with ensuring a solid bond with the bitumen.

A session on the mode NR (Normal) will have made it possible to note that this cartography, which smoothed the response of the engine but by preserving its maximum power to him, seems to better adapt for which does not have the practice of the circuit. The outputs of curves are controlled better and the motorcycle leaves less towards outside as it is the case on the mode S (Sport). 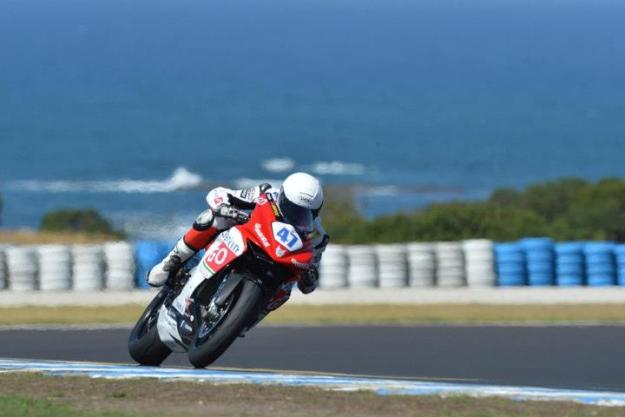 Assessment: A motorcycle of expert

At the end of this day of circuit, one is tired but happy. The engine is well at the crossroads with a doubled incredible promptness of a very size able couple to the mid–modes making it possible to be extracted quickly from the curves, and its lengthening-piece gives way to almost 150 ch. to be expressed. Its linearity is an invaluable asset when the clock is driven out but the gear box lasts and which locks badly lets invaluable tenth escape… To re-examine

When with the part cycles, it should be martyr zed to emphasize its qualities. The more one types inside, the more it appears effective, even if stability on supported breaking can be taken at fault, with a wandering but operational rear wheel-axle unit. Dimensioned nose gear nothing to repeat, it boxes the worst treatments without failing and makes it possible to throw MV Agusta F3 800 on the angle in confidence. The electronic package is interesting but could be more succeeded.

Traction control is not too intrusive on its levels low and lets the tire work by authorizing it to derive somewhat. If it is disabled, it is then necessary to take care of the health of the engine (especially in mode S) and to really modulate its action on the accelerator under penalty of flying away. Moreover, it is adjustable while rolling on the view of the embarked stopwatch, which one starts with the trigger of headlight flash. The shifter, of dimensioned sound, seems regulated with a time of cut well too long, causing unpleasant jolts and a significant waste of time.

A motorcycle not to be Malthus could between all the hands, all which Requires its of pilot Requires much and has good technical knowledge for fully benefiting from its potential. But when one can speak to him (and especially to regulate it), this motorcycle gets its (large) batch of feelings, great! 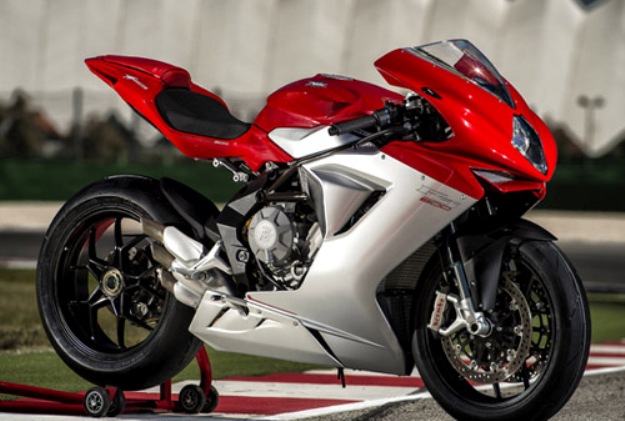 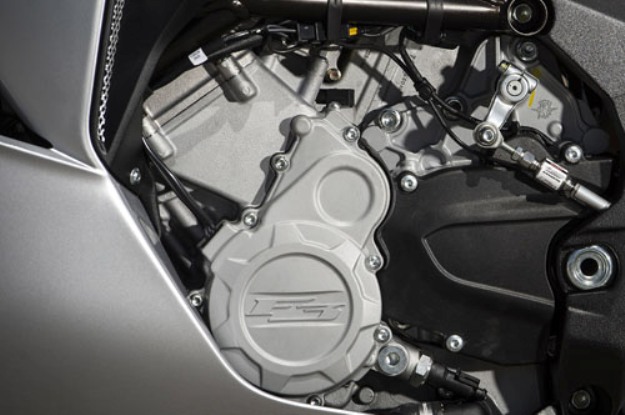 Contra rotating crankshaft (in order to reduce inertia) and box 6 speeds with cassette are always with the program and the valves pass to titanium. The light block (52kg) and very compact directly integrates the oil and water pumps. The final transmission by chain lengthens in order to agree to the new performances: 17×39 instead of 16×43 for F3 675. 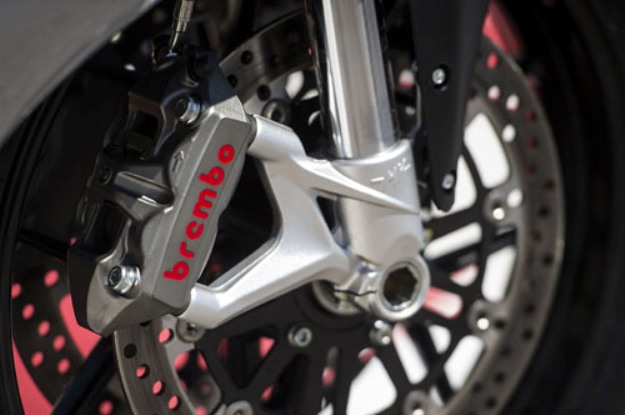 The framework of MV Agusta F3 800 is almost identical to that of the 675 if it is not an oscillating arm lengthened (576,5mm) to improve motricity but the footing (short) of 1,380 mm is preserved. The framework is composed of a tubular steel lattice and 2 side aluminum turntables.

Dimensioned brakes, MV Agusta upgrade the package with clamps cast solid Brembo M4.34a gripping a pair of discs (commune has the 675) 320mm for the front one. In the back, the MV is satisfied with a Brembo clamp doubles pistons and of a disc of 220mm. It is Pirelli which deals with providing the tires, of Diablo Rosso Corsa in first goes up. 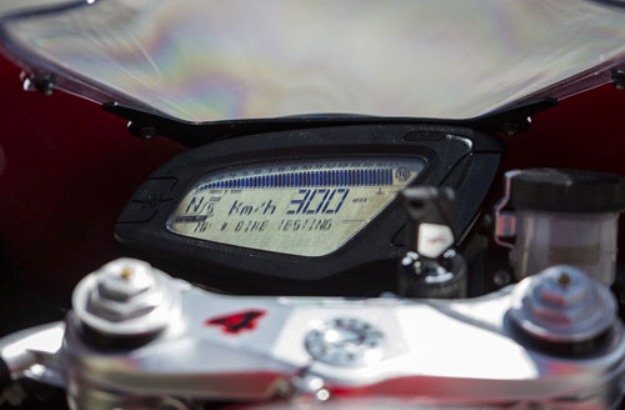 With that is added a menu to enter the adjustments of electronics and a view embarked stopwatch (which one manually starts by the trigger of headlight flash). In this mode one can also, thanks to the buttons located at the left control unit, to regulate traction control in track, without needing to stop. 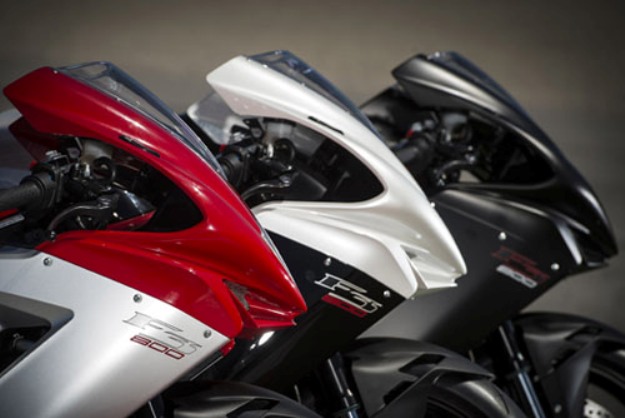 MV Agusta F3 800 profits from pack MVICS, including an electronic accelerator by wire wrinkles whose operation was re-examined to improve some and to soften the answer. Pulling is very short and very soft with use.

Three cartographic of injection defined in factory are available: S (port) lets the engine fully be expressed, NR (normal) smooth a little the answer of the block but leaves him all its horses and R (Ain) attaches the 3 cylinders for the delicate conditions of rolling. Finally staff MV spoke to us about a last mode called C (custom) which as its name indicates it can be entirely parametrized (power, couple, and value of traction control) by the user.

The anti-skid one is adjustable on eight positions and disconnect able while rolling (only on the view stopwatch embarked with the instrument panel). Present also on this version EAS (Electronic Assist Shift), a shifter allowing passing the reports to the flight, without having to cut gases. 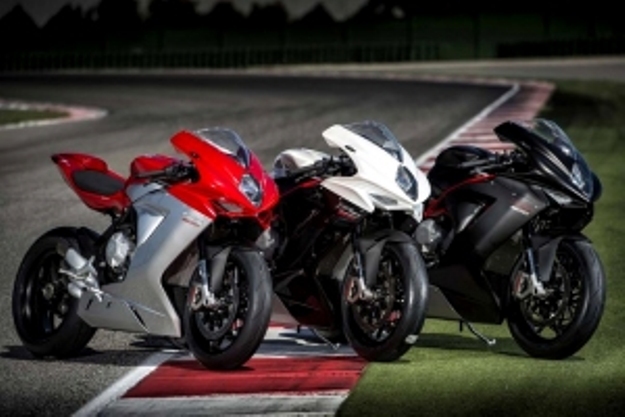