Logically hoped, disproportionately awaited finally tested! Turn on the futile «is long, it is good», strive above all to rejoice the next arrival of this new Suzuki in concessions as soon as the month of May. And above all, beware, don’t call it GSR… Even though by adding ‘1000’ to this trigram, understandably always who you want to talk… GSX-S 1000, a code name not the clearest to pronounce but real claimed legitimacy. The membership in the elite corps of the House, of a direct descent from the venerable lineage of the GSX – R, of a promise of sportiness and efficiency. Compromise also. 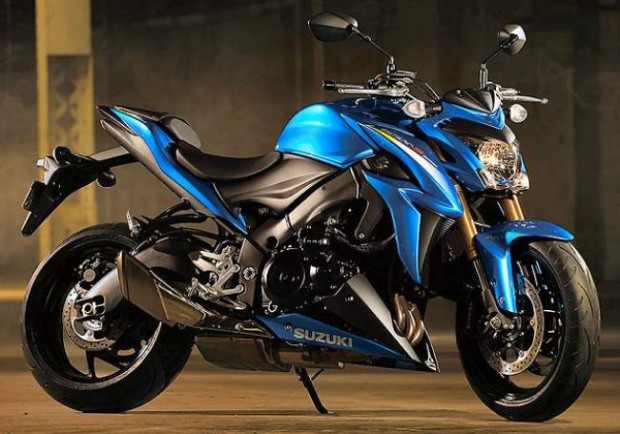 Yes but still… GSX-S 1000 arrives late, very late… and without true originality, or other technical curiosities, certainly, but not without career plan. Even returned from the hyper-sportives, be aware that it keeps you in his sights. This is a business strategy that is however not the only one to consider… And question competition in this part of the market of the strong motorcycles, there is the respondent. A market which, incidentally, does not reach the level that was hers a few years ago, pushed today by a class of 800 especially tonic cm3.

No matter, with its heart of GSX – R 1000 pre-2009, GSX-S 1000 ensured at least a real return of affection coming directly from all owners or GSX – R ex-possesseurs, the historical hypersportive of the brand. Conversely, by focusing on a relatively consensual definition of its plastic, is depriving this famous capital Audacity itself generator to impulsive buying. And synonym for market.

Is that on the ground, when it comes to brake, accelerate, turn, turn, communicate feelings and demonstrate effectiveness, you will see, the 1000 GSX-S is here and there. Question raises, no doubt to have: she knows what the cause, this Suz’.

Dynamic test – as in an open book

GSX-S 1000, neutral and efficient conduct, it the door on it. From the catwalks, it already doubted it skillfully manipulates the compromise. One could also read into it that its engine would be more crisp. Frankly, it was easy.

Unsurprisingly the 1000 GSX-S? No bad surprise, it is safe. Say that it does not seemed to really discover during this test. A very strange sensation incidentally… However, the meeting was more significant. It was expected an easy bike, it is. It was expected a communicative engine, it is. Expected to a world of compromise ‘Techno-emotional’, it is. This Suzuki appears so much as obvious that one would know for ages. Thence to believe have already tried it, there not far… Probably because it knows by heart the GSX – R 1000. Probably also because it already was given to find rejoicing on board devices sharing the same DNA… Let me explain: during September 2011, we tune the Zurich countryside riding the Virus, this bomb concocted by a Swiss dealer, itself supported by his local importer. The Virus was other than a GSX – R 1000 free of the shroud and having swapped its half – handlebars against a right hanger enthroned above the upper fork bracket.

With 185 HP and a long gear as an essay to write before dawn, the Virus was well worth 170 km/h at bottom of first! All without its original steering damper whose editing had become incompatible with the installation of a GSR 750 fork Crown. For the shot with this Virus we were dealing with an aircraft that was really no compromise! And then four months later barely – to January 2012-, take your breath while also away preparation gave us in turn a few long sweat flows… Laid by the Ile-de-France concessionaire motorbike 95 Saint-Ouen – l ‘ Aumône (95310), the gear proved this time be articulated around a part-cycle of GSR 750. Which housed the 9986 cm3 of a Powertrain for GSX – R 1000’s more tonic! Yes but you see, it is that since the Japan is often asked too many questions… Good questions, certainly, but still too many questions… However, they hear the call of the European market: GSR 600 in 2006, GSR 750 in 2011 and finally, the GSX-S 1000 in 2015, with still more pieces of GSX – R inside. The previous evening of this test, engineers had guaranteed us bringing a real attention to the perceived sound from the handlebar, including caregiver acoustic resonance in the air box. I agree: it is happening things in there! Also positive things for the auditory perception as they are for the sensation of acceleration. There actually 145.6 ch and 10.7 mkg torque announced. Under 3 000 rpm, performance is measured, even shy. Then comes a notable revival of tone that keeps you alert up to slightly more than 7 000 rpm. In this range, the force characteristic block GSX – R allows hairy reminders, last report including. Sixth, stalled out 4 RPM (approximately 100 km/h), there to put the throttle stop to convince themselves that reach 200 km/h will not take forever.

Still need – having regard to the length of the draw – achieve well at bottom without return to it twice! A long draw that materializes a first step towards the imagined compromises and highlighting here the desire to channel more closely the engine performance. Okay, it stands: Madam is an S and not a R. No, what bothers here, these are not so much the degrees of rotation required that heightened reactivity returned by any small engine resumption of gas. In the fast and the latest reports, passes again. But when the tight rows need to be chained in second or third, this zealous feature comes to upset the balance on the corner. It is then to show finesse with the wrist and does not hesitate to calm the beast evolving systematically on a report above. Reduce to a minimum the handle guard would probably bring its p’tit benefit for accuracy. Concerning mood prevailing over 8 000 rpm, it tends to be much industrial. The mechanical flight now takes on a new dimension. Propelling the nippon roadster to an upper level, all in a riser seemingly never find end – if it is attached to 12 electronic breaking point RPM. 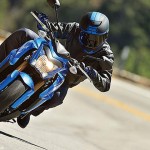 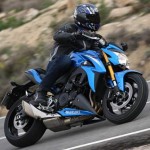 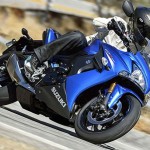 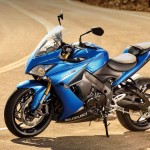 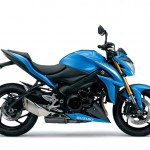 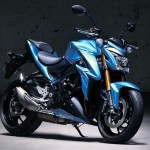