The legendary XJR1300 no end to celebrate its 20th anniversary, with the third machine Yard Built of the year created for the iconic street bike. Following the path traced by the Yard Built the Wrenchmonkees «Skullmonkee» and the Yard Built “Dissident” of itroCkS! bikes, Numbnut Motorcycles offers its first creation.

The custom is well known Yamaha: based in Amsterdam, it is only a short distance from the headquarters of Yamaha Motor Europe. Having participated in numerous outputs and activities among bikers in the region, the Dutch preparers were intended to collaborate one day or the other with Yamaha on a Yard Built project. The fruit of this work: a racing machine that takes you in tripe while leaving the road. A real tribute to the XJR.

Inspired by a unique race 1917 FIAT car model, the «Botafogo Special», the Yard Built XJR1300 “Botafogo N-Type Special” fits perfectly in the Yard Built family. The bike is an impressive machine customized based on a mixture of internally developed custom additional parts and spare parts: the original chassis of the XJR has therefore suffered cutting or welding.

The preparer Chief, Roderick Seibert, worked with Gannet Design to pay tribute to the 1917 with a few Visual allusions race car: wheels Ray Borrani M – Ray in satin black and Pirelli Phantom Sport tires that remind us of this period.

Numbnut added some retro sports notes: tank cap customized his own creation, a cache under the rear seat and side panels in mesh customised aluminium. The custom front “Imola” Numbnut, equipped with a buildup of Lighthouse at mesh, conceals a lighthouse ultramodern led highlighted by a painting of a light green that is the work of painter Mark van Wijk.

The bike pulls its sporty character forks R1 Yamaha, Stirrups radial-mount and the modified fender of the R1 to the front, as well as of the double Öhlins shock absorber at the rear. Style sleek street racer is highlighted also by the hoses the fluid reservoir of Tygon 2375 brake at the front and rear and twisted steel black Goodridge brake lines. The screws of titanium Pro-bolt disc brakes to secure all.

A cache of customized Jack Numbnut lights touch, while Gill of aluminum Steel Dragon Performance carburetor and radiator RF Biketech show a luxury all in discretion.

A Stack ST200 tachometer allows the pilot to stay connected to its motor and control knobs Bike Sport Developments, inspired style GP, fulfill their mission alongside the Biltwell handles. The rear wheel is driven by race chain RK 520 with Chiaravalli sprockets at the front and the back. Created by MVS Race Engineering, the 4-into-2 exhaust custom Matt Black offer a raw soundtrack tailor-made.

Several custom pieces developed internally by Numbnut bring the final touch: foot-levers clutch and brake, heel protectors and a saddle Alcantara custumized Eller Meyer, and the seat cover and the custom side panels.

Several pieces created by Numbnut Motorcycles are now available to order for the XJR owners wishing to customize their machine. They are in addition to the already available from Wrenchmonkees and itroCkS customisation options! Bikes 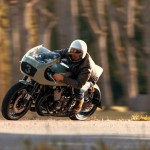 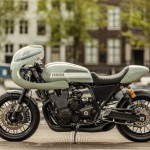 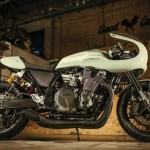 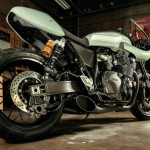