The commercial success of sales and brand image which has led the Ducati Scrambler has made a move to competitors. Hence, BMW has presented the BMW Concept Path 22, a scrambler motorcycle prototype off-road dye derived from the BMW R NINET. 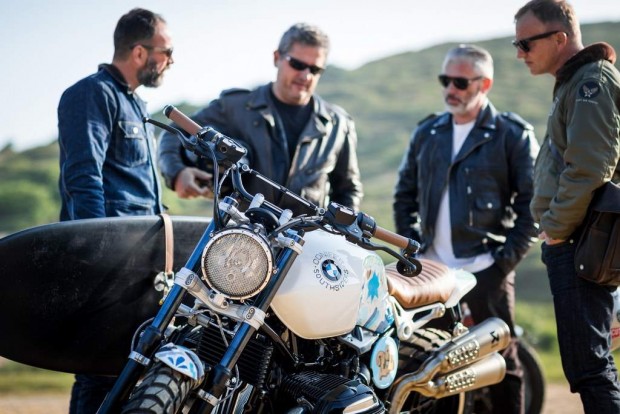 The fourth edition of Wheels & Waves festival opened Thursday on the beach in Biarritz. Custom blend of culture, surf and art, the rally quickly gained momentum and now attracts the biggest motorcycle manufacturers. BMW Motorrad therefore no exception to the rule and has concocted a special preparation based on R NINET for the event: Concept Path 22.

With this realization the brand wanted to take all event codes in a reinterpretation of the scrambler. For this, the Bavarian manufacturer has joined the Southsiders ™, the motorcycle club organizing the event, the artist Ornamental Conifer and manufacturing Dyer Brand surfboards. 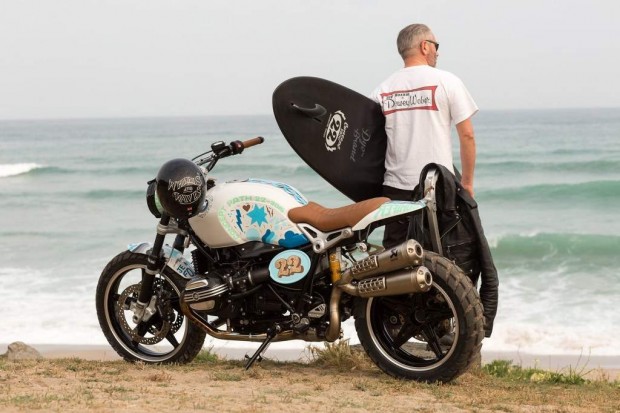 The concept name, Path 22 is a direct nod to the world of surfing. This is indeed a good tips from the surf spots in Europe. This stretch of beach like no other, inaccessible to cars, is in the south of France on the Atlantic coast, half an hour’s walk through one of the biggest pine forests in Europe. The path leading to this place is number 22. To emphasize even more this mix, Brand Dyer has made two exclusive boards while qu’0rnamental Conifer designed two specific leather jackets. 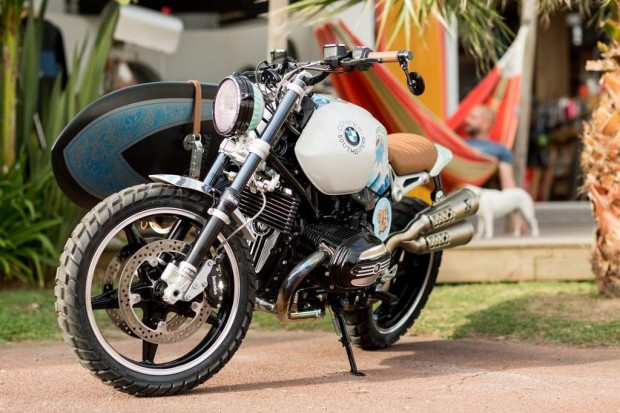 The arrival of a future BMW Scrambler This confirms in 2016. The prototype was presented at the Wheels & Waves Festival of Biarritz in France, an exclusive event that mixes prepared motorcycles, Modern art and surfing.

In fact the surfing theme which moves to the BMW Concept Path 22. The name ‘Path 22’ refers to one of the best areas for surfing in Europe, on the Atlantic coast of southern France. Something carefree represented in the tank decoration or accessory designed to transport one of Dyer Brand tables created for the occasion. Ornamental Conifer is the artist who has given his special envoy to the bike stand to decorate the lighthouse, the tank and front fender touch.

The BMW Concept Path 22 is an excuse to anticipate what will be the BMW Scrambler. It will equip the same air-cooled boxer engine air retro, shaft drive and a more minimalist. Öhlins front fork has less travel, tires are mixed, the front wheel is larger, the simple tilting thrown into the opposite side of the escape and said Akrapovic dual exhaust rises from the ground to make it more capable on gravel. 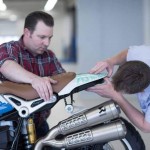 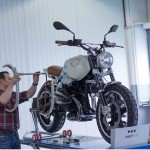 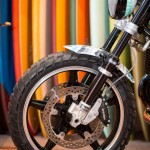 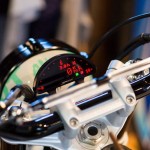 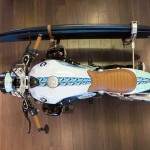 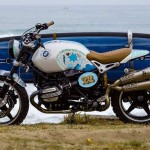 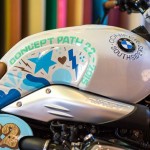 As good prototype there is also attention to detail, as instrumentation and intermittent motogadget cuffs, the parties created by Roland Sands Design or Gilles Tooling. Special mention for aluminum wheels of 5-spoke created by BMW Motorrad and design brown leather trim and the number 22 on the side plates.

A breath of fresh air certainly for the BMW range with which to more arguments preparers bikes this style.