After winning the morning in a slightly disturbed by the rain running, Jonathan Rea (Kawasaki Racing Team) was imperial dry track on Sunday afternoon at the Autodromo Internacional do Algarve and won his tenth win of the season, a success that allows him to have four in seven innings doubled since the beginning of the year. 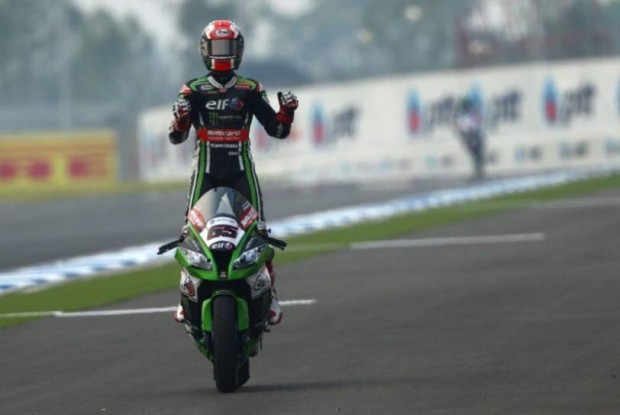 Preceded by Davide Giugliano (Ducati SBK Aruba.it Racing-Team) early in the race, the Northern Irishman, only eighth on the grid following his crash in qualifying, and teammate Tom Sykes (Kawasaki Racing Team) are in a initially remained in the wake of the Italian until Rea will increase the pace and do flakes of his two opponents to finish with five seconds ahead of Giugliano.
The latter ascended the podium for the eighth time in his career and was ahead of Leon Haslam (Aprilia Racing Team – Red Devils) while Sykes finished eighth after a difficult end of race.
Chaz Davies (Aruba.it Racing Ducati SBK Team) was fourth, ahead of Michael van der Mark (Pata Honda World Superbike Team), Sylvain Guintoli (Pata Honda World Superbike Team) and Jordi Torres (Aprilia Racing Team – Red Devils).
Leandro Mercado (Barni Racing Team) and Matteo Baiocco (Althea Racing) completed the top 10 while the French Christophe Ponsson (Team Pedercini Kawasaki) and Randy de Puniet (Voltcom Crescent Suzuki) took the fourteenth and sixteenth places.
With WorldSBK 25th victory and sixth double wins, the fourth this year, Rea leads the overall standings with 330 points, 124 ahead of Sykes, Haslam 131 and 146 of Davies. He beat Carl Fogarty with the third longest streak of podiums in history, with a total of 15 against 13 for former World Champion, and find opponents on 21 June in Misano for the remainder of the 2015 season.