We only speak of them: the BMW R Nine-T and Ducati Scrambler, perfect illustration of the emergence of the neo retro. If they are not natural competitors, because of their price differentials or displacement, they meet in their philosophy, design, and fun they bring to driving. Here neo retro game of the year! 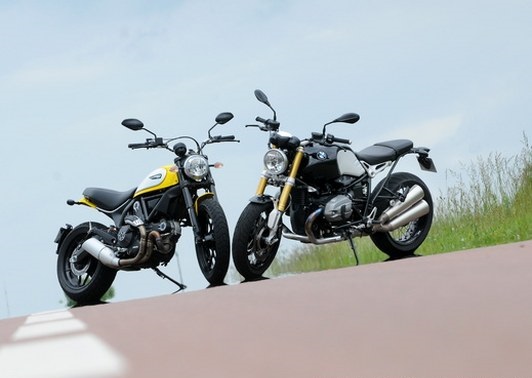 To my left, the BMW R NINET (1170 cm3, € 15,200) to my right, the Ducati Scrambler (803 cm3, from € 8,590): two motorcycles that, in theory, does not compete . So, do not jump up too fast behind your screen: if we have the opposite, it is mainly for what they represent. Both are neo retro moment.
They talk a lot, they experience remarkable success: BMW 863 NINET past year, Ducati 675 Scrambler sold to date. In short, they symbolize the success of the new neo retro, modern or classic as they say in Britain. In fact, we wanted to bring together more than opposing them, while seeking the strengths and weaknesses of each. , Action!

The BMW R NINET, this is the last beautiful shot of BMW. Beautiful and intriguing, the Bavarian reveals a sculptural line, with assumed that distinguishes pure German production: a single black, no controlled suspension, traction control or fuel gauge, but aluminum parts and a saddle maintained by a very fine back loop that allows no storage. No practical sense, room for emotion. 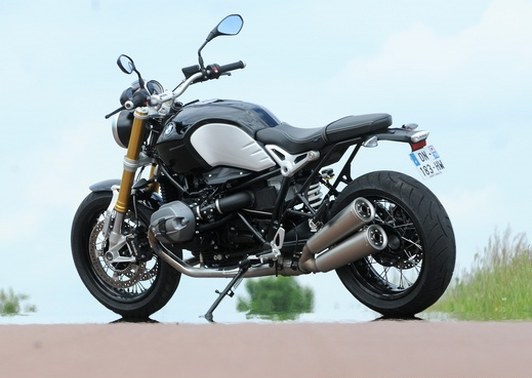 And this is true at startup, when the boxer twin shaft air-cooled oil is NINET dance on its stand by the torque reversal. Singing Akrapovic silencers side doing the rest sensations. By far, the rapprochement with historic roadsters brand is clear. Up close, between the sports front axle and the instrument cluster is much more modern. A BMW that also wants a sexy Italian, straw!
The Ducati Scrambler is the reinterpretation of the 60s desmo cylinder Scrambler For 2015, it is the L-twin 803 cm3 of the Monster 796, disappeared from the catalog there are two years, which was incorporated. Again, as at BMW, Ducati reuses proven mechanical base, taking care of deflating and especially to soften to facilitate urban use and access to the beginners.
The Scrambler gets the tank lying aluminum sides and great riding his ancestor but gets a digital instrumentation and a swing arm so Monster. No doubt, this is a modern Ducati tribute of the past. And given its commercial start, Ducati has not goofed. 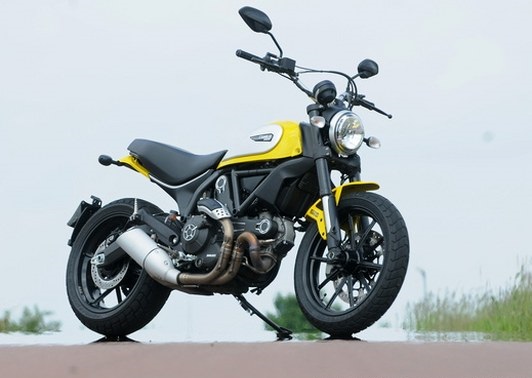 Getting relaxed ergonomics hand or committed?

Both bikes are fairly thin, almost svelte. Nevertheless, the Ducati is clearly distinguishable side footprint: many people will be surprised by its displacement, confuse it with a 125! It must be recognized that the Scrambler template really small displacement: 2165 mm long, 1445 mm wheelbase, 790 mm seat height and only 188.1 kilograms fully fueled checked.
In fact, with its wide handlebars and handlebar triangle / seat / footrest very relaxed, you will immediately feel at ease. Between maneuvers stationary and the excellent turning radius, we already guess the city will be a formality in command of Italian. But the big guys also find it a fairly limited roominess to squeeze their stump.
Universe Change at BMW: the NINET more strings. Its ergonomics are much sportier, more cafe racer. More bearing on the cuffs, it is more elongated body and does more with the bike. Nevertheless, the wheelbase remains small (1476 mm) and relatively low seat (785 mm /.
Once is not custom, the arcade at the crotch is more favorable to the Ducati, on which lays the ground more easily on foot when measuring 1.70 m. With his big flat and a top weight (220.8 kg fully fueled checked), the BMW requires more arm during engine off maneuvers. 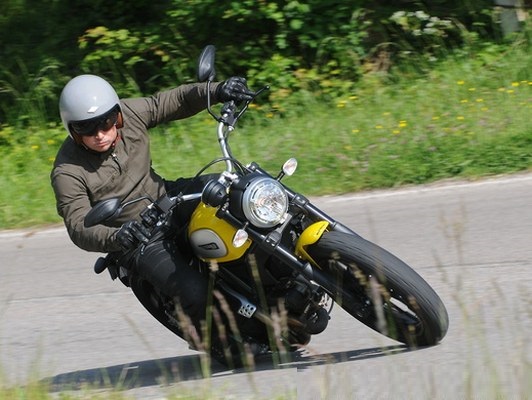 We equip motors quietly while hot. Between two remarks on the presentation of each Bertrand and myself can not help but turn the throttle handles.
The sounds are very worked, especially on the NINET equipped with Akrapovic line. Soundtrack severe crunch at all costs, this is good! Add to that a couple of well marked reversal in static and lovers of flat twins will be in heaven. Is not Bertrand?
Ducati, the sound appears more subdued, more legal! Nevertheless, one can easily recognize the characteristic stamp twin Bologna, the rattle of the dry clutch – long since abandoned for maintenance purposes as well as sound standards – and less. Still, the charm is also, for sure.
Once we insert in traffic, and the Ducati its arguments: relax position, upright posture that can see far better turning radius and more is very easy to use, very soft controls for Ducati … almost a school bike! Remains a very wide handlebars and mirrors that penalize gymkhana city.
BMW, far from being an anvil with his engine which lowers the center of gravity, also hardly steer short, sneaking like Ducati ant. Never mind, the NINET awaiting red lights to get noticed with powerful start, able to drop almost anything with wheels.
With 12.2 mkg measured on the dynamometer – 4.6 mkg more than the Ducati – and short reports, it is clear that the BMW a lot of dust, but its start in muscle bike fashion demands attention while such as shifting, cardan forces. However, it makes you want to accelerate hard and driveway, he still décoiffe this flat! 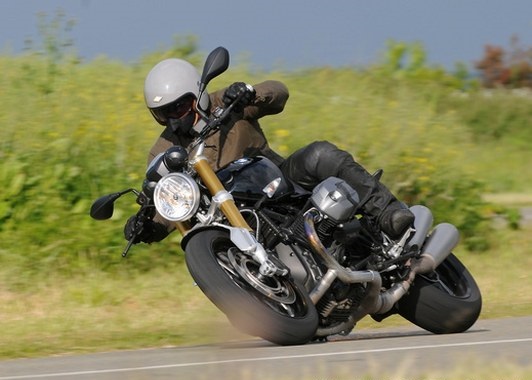 In this comparison, we used the only highway to easily rally point A to point B … as usual in the end. This allowed us to verify that our two beautiful one day are not expressways Eaters.
Certainly, lying in the BMW helps to split the wind, but the roar of its engine to 130 km / h (4200 rev / min), ends up tired, and the smoothness of the seat remembers your good Remember when you stay a little too static in the saddle.
Ducati does not really better: the engine offers sufficient times and do not give the impression of forcing to 130 km / h (5900 rev / min), but the arm position in the air is quick to turn you flag … in short, live the county.
There the two philosophies are affirmed. With the Ducati, turn it spins in turn, no real instructions and with great ease offered by its wide handlebars. With a weight / power and sufficient voluntary motor although deflated compared to the Monster 796, lots of fun, wheeling to the time another key.

But above all, can be wound cool enjoying the flexibility of the engine and suspension as its position invites to enjoy the scenery. To cruiser effortlessly into the wind, the Scrambler is really all indicated. Between position continued support (very tolerable though) and overall firmness, NINET do not like small roads full of bumps and the fact you know you stir the guts!
His world at BMW, it’s pretty well coils coated with the grain that goes. Here begins the lean angle orgy punctuated with reminders muscular and downright intoxicating sound side. At this point, we say it hides well his game, the German neo retro, for it then reveals all its modernity. 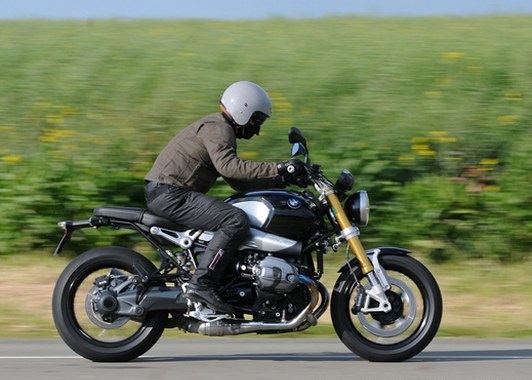 Impeccable rigidity, powerful braking, precise running gear, tire grip Metzeler Roadtec Z8 … the pins footrest are still there to remind you not to add while the cycle-part cash without flinching a steering sportsman.
Finally, it handles like a sports roadster it a few years ago, and it is frankly fun for fans trajectory. The praise of the past stops short because NINET offers the rigor of modern motorcycles. Ultimately, we say that a “NINET Cup” as Triumph had done in some countries with his Thruxton, it would make sense.

The Ducati Scrambler Loves the Sand

In this comparison, we tested the Urban Enduro version of the Ducati Scrambler. Of the four proposed by Ducati universe, it is this variation that is most oriented terrain with its reinforced handlebars, its wire wheels, the duckbill and headlight protection grid, while maintaining its retro look with his padded saddle.
We had made an appointment on the ground of Alternation Suv, north of Paris. A space dedicated to the 4×4, which allowed us to test the skills of the Ducati in the soft sand. After a few slip and flattened, Urban Enduro unveiled another side of Scrambler: sand and mud rather not scare and he is doing it well thanks to ergonomics that favors driving up.
The engine allows the docility slow changes, lightness very forgiving, while torque will get us out of bad situation when the front tire sinks into the sand. Certainly this is not a recreational enduro, but it is much more fun in this role the Triumph Scrambler, heavier and less nervous. 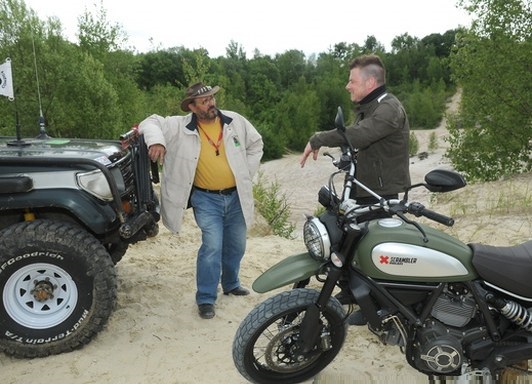 The Urban Enduro is the very moderate terrain that the Scrambler Icon is in town or on small road: fun while being versatile and accessible. It does not ask the impossible all the same, with a monoshock 150 mm travel, the Urban Enduro digests moderately jumps.
We did not want to tempt fate with the BMW NINET: adventure would have resulted in the twisted part. However, a variation of the Scrambler NINET has already been mentioned without confirmation from Munich. And if the mark to the propeller was decided to market a Scrambler, it might well work.
The ergonomics of the NINET does not lend itself to standing pilot. And graft travel suspension on the current basis significantly increase the seat height … In short, there taf before the scrambleriser NINET, but who knows … maybe that BMW has a different idea in mind …

Comparative Conclusion that The Ducati NINET is Required!

Do not look down the table usual notes of our comparative, we have deliberately excluded in this confrontation shifted. A potential buyer of BMW NINET not lorgnera to the Ducati Scrambler, although the Germans recognize that the small Italian could harm them. 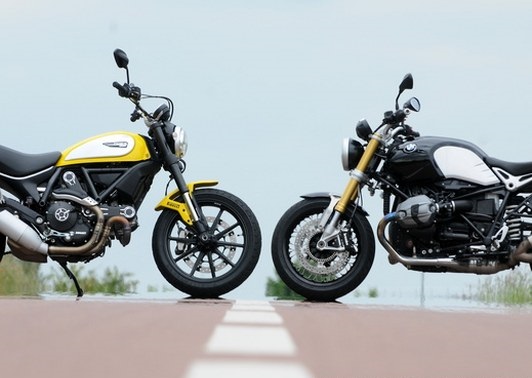 Both bikes feature a nice gap displacement (1170 cm3 for BMW, Ducati 803 cm3 for) and pricing (€ 15,200 against € 8,590 to € 9,990). Obviously, they do not boxing in the same category, even though their design brings them together, using techniques proven bases in a skin blend of past and present.
Driving pleasure side, again, it is difficult to separate them, and that’s good. The BMW R NINET is actually quite sporty roadster in the soul, café racer fairly bodied, who likes muscled occasions, arsouilles way Joe Bar Team on small roads. It provides an enormous pleasure and Dait evidence of ultimately very current effectiveness.
The Ducati Scrambler, far more accessible to beginners it is approved A2 also wants very versatile, between an easy daily use and a cheerful driving fun even on small road or off road. And the four universes of Ducati Scrambler also a pretty: Full Throttle way between a Monster and Urban Vintage Enduro way any field, there choice. In the view of drafting, it has not finished cross of these two …
Thank you to the concession area Murit (Chatillon – 92) and CO2 Moto (Boulogne-Billancourt – 92) for putting us in touch with owners of the two motorcycles. At Christian and Didier club 4×4 mix for allowing us to come and ride on their famous track an hour’s drive from Paris. If you have a 4×4 a real one! Or quad, do not hesitate! 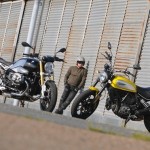 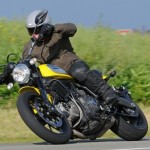 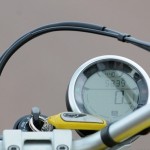 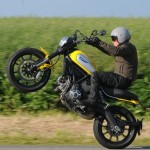 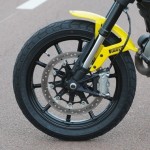 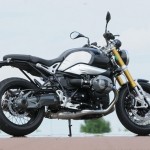 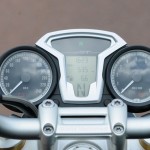 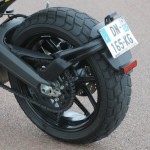 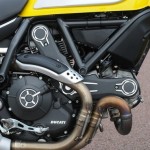 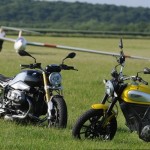 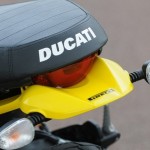 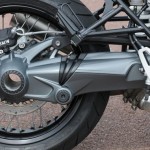 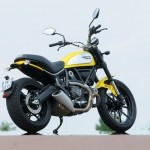 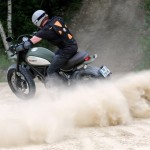 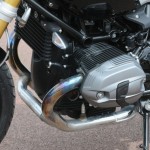