The overhaul of SX-F 2016, was expected no surprises … But the revival of small 2-stroke SX 125 is a little cherry on top of the range 2016 Cross! As we are greedy, we propose to start with the dessert with testing this new KTM125 SX bombesque. 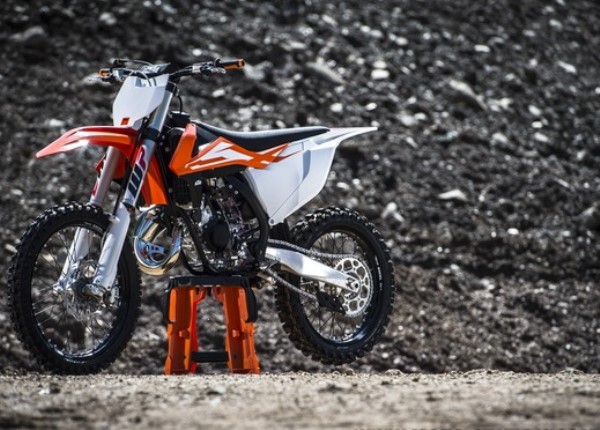 For many years now, KTM remains the only manufacturer to pursue very seriously the development of its 2-stroke. But that was some time that the 125 SX retained its technical base, just refined from one year to another.

While dusts off his Yamaha YZ 125 2015 to come and play a little more about the flower beds of the Austrian manufacturer KTM answers tit for tat: the new generation SX 125 tumbles bang for 2016!

For this new vintage, KTM is not content with a simple facelift, but a small 2-stroke entirely new Cross. This obviously starts with the new look that will judge each according to his tastes, then returned quickly in heavy technical modifications. 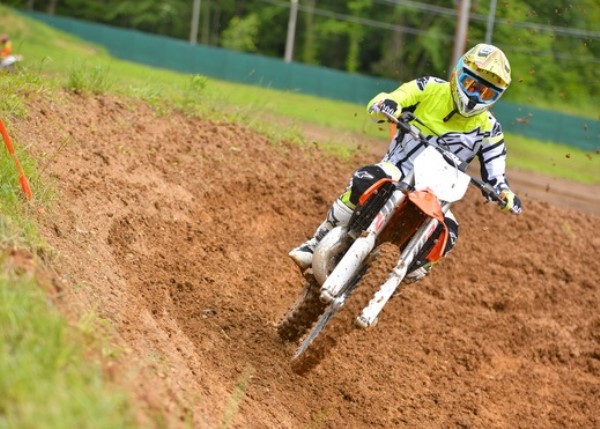 As SX-F, 125 SX adopts new suspensions: room for air to WP fork separate function. Frame Architecture magazine redesigned swingarm … the cycle part is not left out, but the engine either.

And this engine, I must have looked a long time! The compactness in the lower level would almost shivering: you’d think a 50 cm3 engine! The exhaust profile also changes.

If the carburetor is still relevant in 2016, the new design of this engine is not trivial and this year weight gain could well hide an anticipation for the arrival of electronic injection of 2- time, the entire injection and fuel pump being heavier than a carburetor. But that, we’ll talk about probably very quickly … 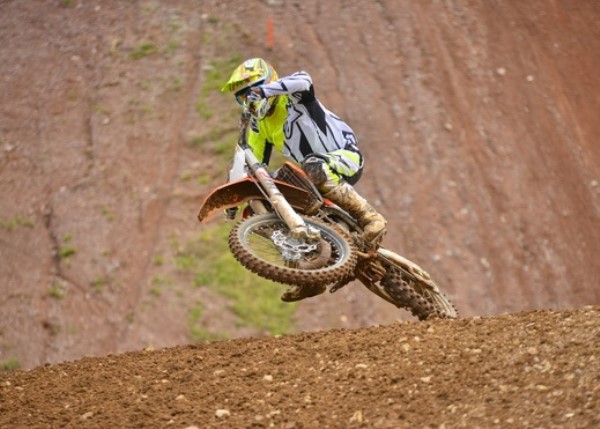 The small KTM still displays a high level of finish and equipment that can not be ignored. The good news is that all the new products mentioned above also apply to the 150 SX, a 125 with a cylinder / piston different. A willingness to KTM to make accessible the upgrade according to the desires of the driver. The 250 SX is itself “punished”: no major change in sight.

Saddle up, nothing really changes what we already knew. The bike is between slender legs, found his place as sitting upright, the cockpit is welcoming and controls feet / hands instinctive. In short, it is much faster, but the new saddle redesigned to be more comfortable is not that much: we feel the plastic frame when sitting on the back!

Seated on the bike, it is rather confident and the first laps invite to the game soon! The motorcycle, any slight, ranks really where we want, we take a rut, it intersects a rut, it turns flat … The handling really does not default to the small SX, but the advantage of 125 2-stroke overall.

The whole is rather well balanced, fork and shock almost running by mutual agreement. I say almost because the fork will show some signs of discomfort from time to time on small impacts, the first centimeters seem a bit dry. However flexibility is waiting for you after this course. Maybe even a little too much for the fastest, but personally I found the correct compromise. 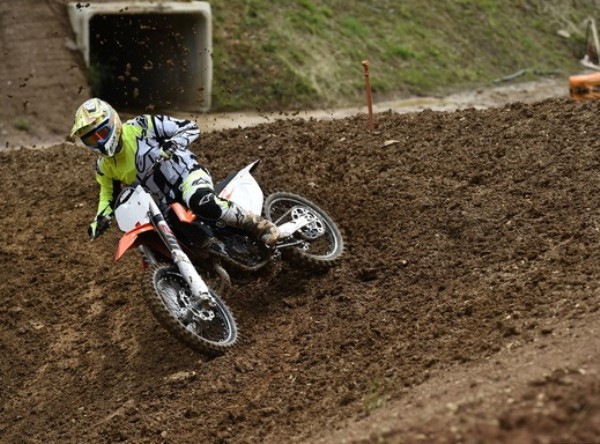 Pass the ground vitality of a small mono 2-stroke is not always simple, and that side, it must be said that the WP shock is doing wonderfully: Tensile is present on a circuit Maggiora rather bold in our first test.

Overall, the 125 SX remains the toy that we have long known: fun, enjoyable and easy with perhaps a touch of liveliness and more thanks to its weight down. Add to that it shows fairly stable, KTM pulls out a new weapon in the category 2-Stroke.

But it does not stop there, because the mill too, has something to say. We will make it short: it works bad! It is guessed almost as soon as we started the KTM: the blows of gas in a vacuum show a full of vitamins melody that sounds damn right, plenty to awaken the senses of aficionados hole cylinder (which I admit being part ).

On the GP circuit Maggiora, which has a vertical drop of jumps and especially where we must not ease off on the throttle to pass, the 125 SX did not flinch, quite the contrary. Although completed, the mill agrees to descend low enough without giving any sign of weakness. Well, we are talking about a 125, should not be exaggerated either, but still. 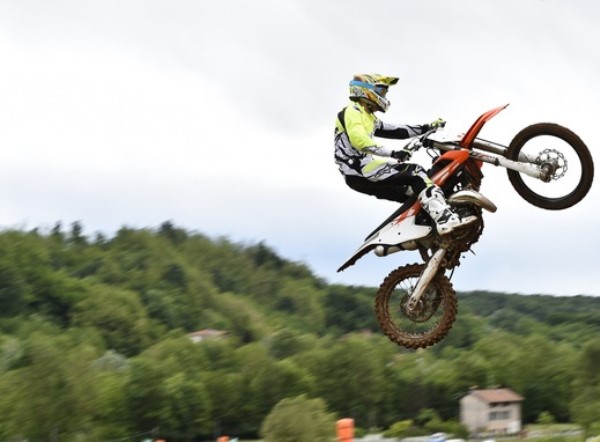 The 125 SX does not mind what the violent blows clutch, unlike the alarm is energetic. We note in passing that the hydraulic Brembo – and not Magura – offers an excellent feeling. Yes, we admit that we are probably a little abused …

So far it does not really different from the behavior of the older generation, but when you hang the midrange, the small SX reveals some more muscles. The coast bouffeuses horse Maggiora (fat or furniture that day) does not scare the wasp KTM.

It rises with force and, if not the engine safe to engage the four easily fully loaded, the outreach of the SX will arrange to do the job in our case a double rather hefty swallow: it takes the towers and does not lose performance. Note that our test bikes seemed perfectly settled: no holes in acceleration, it creaked severe. You have to admit, the 125, it’s good! 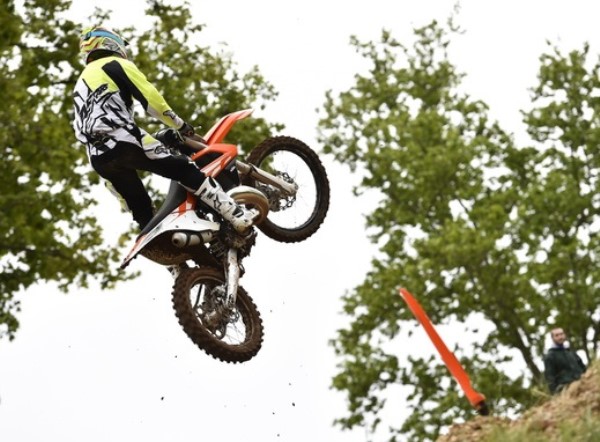 Test result according to:

A true reference in the category of 125 2-stroke KTM 125 SX 2016 should meet again this … More compact, lighter, more modern, a punchy engine that has a sacred health: the Austrians really do not l intends to set aside this capacity.

Wrap a bend in two and awaken the boiler to the clutch poses no concern really here. Beefier mid-regime, and still much longer, the engine of the 125 SX is a concentrate of vitamins. The frame may show a more playful hair, more lively and very well balanced. Only the fork probably deserves some additional personal settings, but overall the 125 SX remains a real success!

The fee also evolves 2016: € 7,450 to the increase is acceptable (125 €), but who would obviously past. It remains to see what we KTM France reserves for its Race Orange operation intended to licensed … 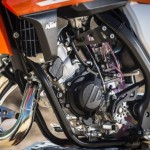 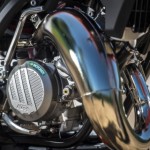 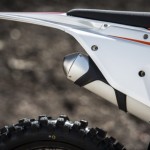