Honda is back on the trails mid-size market with the arrival of this new version of the VFR800X Crossrunner. The winged firm is not at his first attempt since 2011, a previous version had been born, but its risky design had not found its audience. Today, things have changed with the arrival of this new version based on the Sport GT VFR800F we had tested on its release in early 2014. 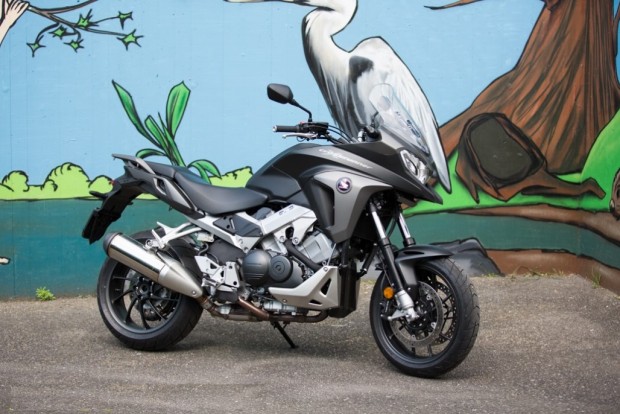 Honda has learned his lesson and today offers a bike that has evolved in the right direction. The optical front takes the form of a large X, common to several models in the range and is equipped with LED daytime running lights. Here it is topped by a small windshield which, unfortunately for very tall people, is not height adjustable. Honda innovates with new LED flashers Intelligent Callback: These operate independently taking the ABS system information and wheels and calculates the appropriate time to cut the flash when the motorcycle is again straight. If plastics adjustments are good, as usual with Honda, to see some weld seams we regret.

Past the front side, the cockpit offers a wide aluminum handlebar placed on the bridges ideally placed in height and has a counter-block backlit LEDs. This provides essential information and does not in the superfluous. However, you’ll find everything you need. Speedometer and tachometer share space with the gear position indicators, consumption and autonomy, ambient temperature gauge, shows the edge and different totalizers. 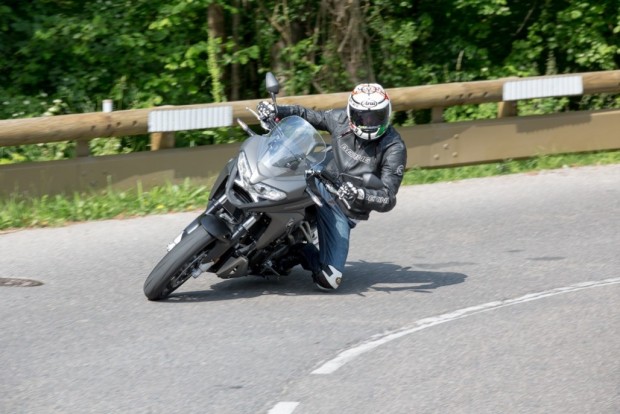 A witness also shows the firing rate of the handles (five options) and TC setting (Traction Control) adjusted in two positions via a stalk reported. If these two intentions are welcome, I wish the integration of these two elements is more discreet that apparent thread for heated grips and stalk reported for TC, especially as their use is very easy and the ergonomics of the driving position is perfect.

The reservoir offers a gargantuan capacity of 20.8 liters goes very high and allows to serve as a rest for your left arm. The saddle which can vary from a height of 815mm to 835mm (with tools), provides excellent comfort and perfect driving position, thanks to its fine form in its front part. Passengers will also be happy with a large saddle and thick. Long tours therefore pose no problem to the weakest séants. The footrest position is ideal and allows for a relaxed position. However, their width becomes debilitating driving at steady pace; Indeed, the soil will be quickly reached. The side stand also has a width in the handicapping quick exercise. 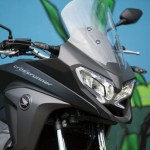 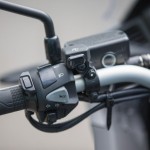 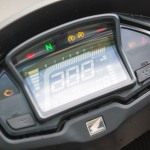 Honda could have made the choice to offer immediately a center stand, which would have been consistent with the use of the bike. However, it is found in the list of options.

If the front offers an aesthetic of the most successful, the back seems heavy and added; the back of the sports-GT VFR800F him being much more sensual. Large handles allow your passenger to stand comfortably and fixing suitcases 29 liters option will undoubtedly be very easy. Honda chose the swing arm and the high rims that already equip the VFR800F. Pity then not pushing aesthetics study to the end!

The engine powering this new VFR800X is identical to that of its big sister, namely the V4 90 ° with the VTEC system delivering a maximum power of 106cv at 10’250tr / min. Pressing the start button will not delight fans of beautiful vocals, since here you arrive in a world of “zen”, new emission and noise standards oblige with a record value of 89dB at 60% of maximum speed, so that a modified 50cc scooter you break the ears in comparison. If no sound somewhat disconcerted me at first contact, I must admit that over time, this is nice and allows for a conduct that is not conducive to the Bastard. 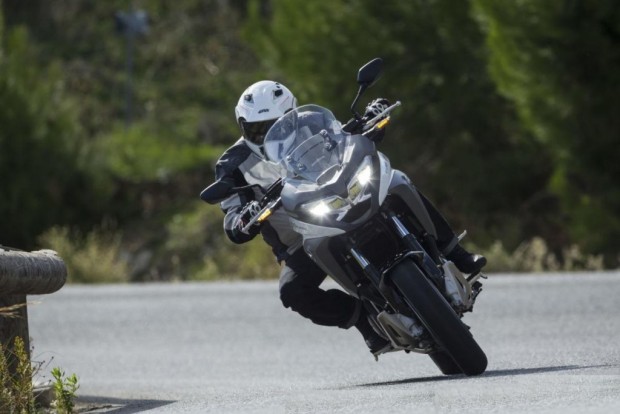 The first kilometers are in town and city implies that says: acceleration, braking, cap, urban slalom … what more to undermine a biker. Surprisingly, and despite weighing 242kg fully fueled, the Crossrunner demonstrated excellent agility and maneuverability in this exercise, only the parking maneuvers require a little more muscle. Perched high and with a turning radius to rival many competing, I feel immediately comfortable and navigates in this universe without any apprehension, but mostly helped by a straight and natural riding position. The engine is very flexible and offers good stimulus and causes no smoothly. Once extirpated from this hostile environment, I head on a stretch of highway before joining the campaign. 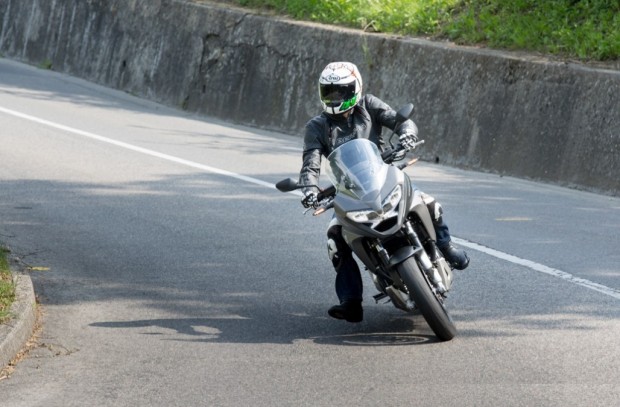 The first kilometers reveal the willingness of the engine block, the VTEC system operates beyond 6’500tr / min and provides a furious character and his past that regime. You cruiserez carefree in sixth gear, but if you want to make as rapid as lightning exceeded, it will drop a view both reports; Indeed, on motorways and in top gear, the engine is not running in the speed range of VTEC.

The protection offered by the bubble is too just beyond 120km / h and gratifies me of turbulence in the helmet. Well, obviously, from the top of my meter eighty-eight, I’m a little more prone to turbulence than other bikers. Finally, if Honda had chosen a high, height adjustable bubble, this phenomenon does not appear.

Excellent comfort on the raod

Admittedly, the city and along the ribbon is not what there is nicer, although this allows to go faster in some cases. But the primary purpose of a motorcycle is fun and the countryside is much more appropriate.

The first curves appear and motorcycle shows excellent comfort on a road often damaged the suspension of HMAS Honda plays its role perfectly, so much so that the donkey without reducing the pace. If comfort is the rendezvous ride mode, this flexibility becomes disadvantageous in sporty driving. The bike disunited during rapid changes of angle, pump excessively and playing rocking horse during heavy braking. I must necessarily go through the box settings of the fork and monoshock to overcome this feeling.

A few laps later saw the bike responds more easily managed and allows to keep a respectable pace. The engine will then show sound very voluntary and when I ask for it in high revs. The 12’500tr / min max speed are achieved quickly and go out fast curves without any apprehension as the engine block is flexible. Traction control will be switched on wet road, inevitably, with highly placed rev range. It would be difficult to trigger on a dry road. The gearbox is precise and no velocity jump will have been identified. Again, Honda offers a very accomplished box, but ignores a shifter (only optional). 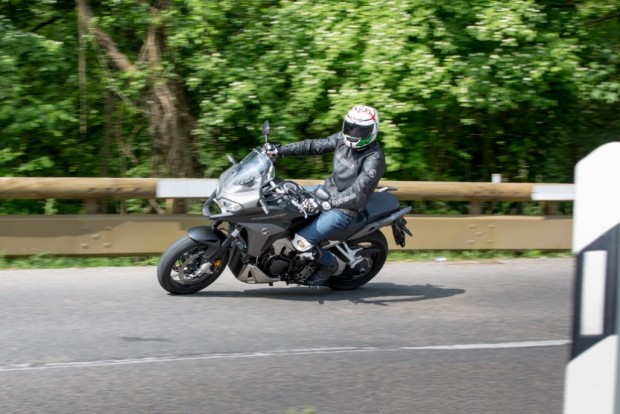 The ABS system is set correctly and I can strong tighten the lever forward without a second thought 310mm discs, while the back will retarder 256mm disc. Incidentally, the front-rear braking is combined electronically. As the kilometers, braking will be shown reassuring and pleasant, making it ideal for young drivers, but will have its limits downhill at very good rate, the fault of the high weight of VFR800X.

For players like me, you can not disable the ABS, only the traction control is completely deactivated. The tires, Pirelli Scorpion Trail, ideally suited to the temperament of the VFR800X and well digest engine behavior, including the outbreak of VTEC.

This VFR800X has very good skills in many areas, whether in the city, in the countryside or on the motorway, it should find a buyer among bikers seeking a versatile motorcycle. 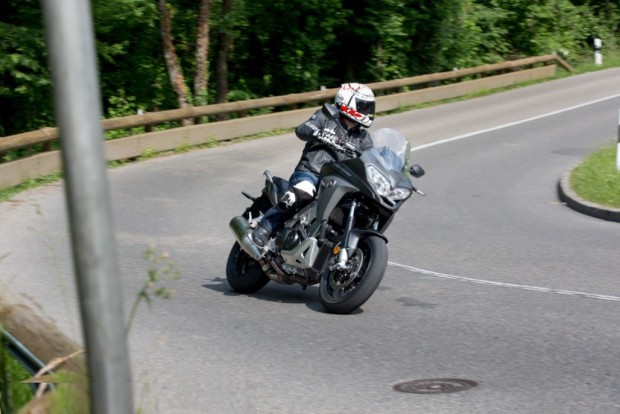 If the first generation was a commercial flop, the latter should not suffer the same fate. Honda has done a good job and it shows once in the saddle, the new ergonomics and comfort greatly involved in this success. The authorization proposed by the V4 800cc block is simply ideal for this type of machine. The VFR800X is perfect as young elders allowed only by being voluntary in all circumstances. The general comfort and the large tank will guarantee steps near 400 kilometers nonstop. Homogeneity is the qualification that I would take to set this version in 2015.