After the S1000RR and S1000R, BMW offers a new version of its platform 4 cylinders. Far from a risky tinkering, the German crossover proves extremely effective, even if the approval is suffering untoward details. But ultimately, the BMW S1000XR could be the new queen of Alpine passes! 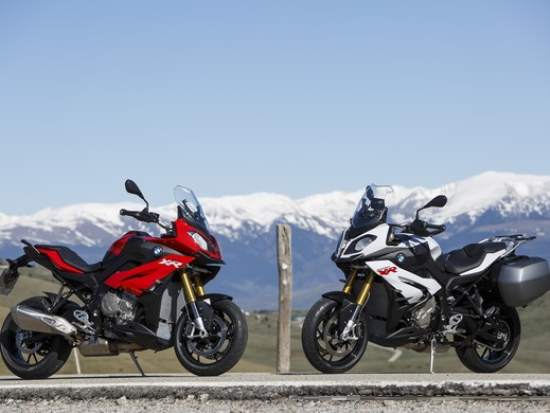 Our opener, a BMW marketing manager, takes our little pack of journalists at a good pace on very small winding roads. S1000R riding a roadster, it hardly takes time to watch the sumptuous Catalan landscape, the theater’s press launch of the new BMW S1000XR.
A motorcycle that won our Facebook poll on road 2015, evidence of the interest in the new generation of crossovers, the latest evolution of the Yamaha MT-09 Tracer in the Ducati Multistrada 1200 through the new Honda Crossrunner. Often very powerful motorcycles that do not engender melancholy.
Thanks! A curve that closes slyly! No problem Pro ABS slows the bike while taking into account the angle of inclination and it goes … Unbelievable pace that S1000XR can hold!

Even closely derived from the BMW S1000R, the S 1000 XR is not a thought motorcycle hurry. His serious design demonstrates a real desire to stand out from the base to provide a unique bike and to be honest, a lot more versatile.
We recognize immediately the engine and the cycle part of the S1000R and the asymmetric look of the BMW S 1000 RR sports, but XR stands out quickly, particularly in terms of ergonomics. Highest saddle (840 mm standard configuration) that the roadster, it also has footrest lowered by 35 mm, a statement handlebar and 13 mm closer to the driver. 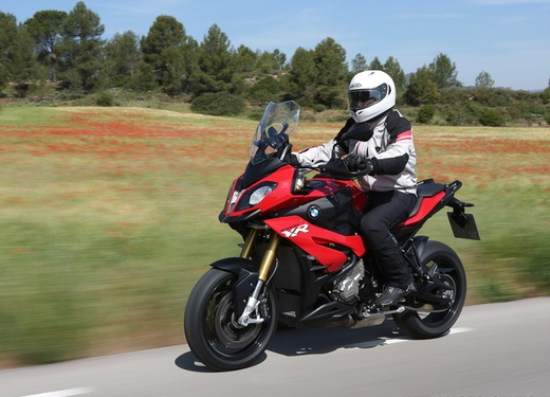 Static, the bike seems really high and – once will not hurt BMW – very wide seat does not promote the arcade at the crotch. In fact, less than 1.75 m will really penalized. In addition, the footrest abut often in the calves and hang the boots. Quickly painful when maneuvering at a standstill and a pity that S1000XR shines pretty well.
A Palpable Dynamic Technology
When we left all the bikes are in fashion Road 160 horses response to the standard handle, Pro ABS and traction control connected, flexible Dynamic ESA set. In this configuration, recommended for daily ride or duo, the BMW S1000XR offers a very soft damping.
Hydraulic appears frankly released and the bike goes back much on its suspension on support changes while the masses transfers are very pronounced when braking. The longer the race suspensions obvious!
Nevertheless, on degraded coating or passing speed bumps, comfort is the rendezvous. In addition, through sufficiently advanced footrest (not like on the Yamaha Tracer), it is possible to help the tension of the legs to absorb impact. 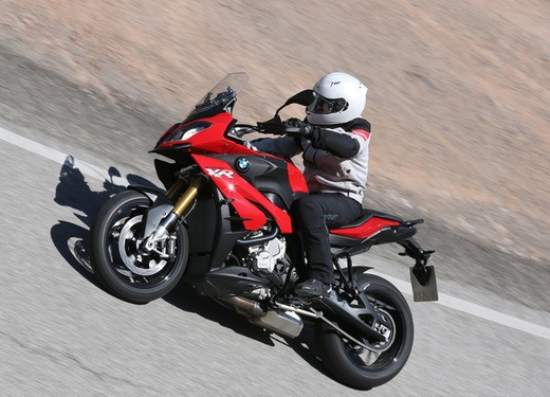 A few kilometers later, I switched to the Dynamic mode and immediately finds the suspensions behavior change, less sensitive side brake or throttle response. The bike becomes firmer, and then put the excellent rigidity of the chassis forward, with very healthy turn triggers, as the best roadster category.
Thanks to a generous ground clearance and adhesion Pirelli Diablo Rosso II, we soon appreciate the excellent skills of the S 1000 XR in the sinuous. Plus ça hand drifts it becomes more technical, and the S 1000 XR demonstrated rigor. And agility proves genuinely remarkable for 1000, despite his rear tire in 190 / 55-17 and 228 kg fully fueled.
Having vitality 160 hp
For this presentation, BMW has put together a sufficiently long course (250 km), including some highway as a link, a little town and a max of very twisty winding roads where it was difficult to pass the fourth or maintain 60 km / h average.
The opportunity to enjoy the vitality of 4 cylinders in line. Borrowed from S1000R, it has undergone some changes (air box, camshaft) but it develops the same power in free version (160 hp) and very close mapping according to BMW. 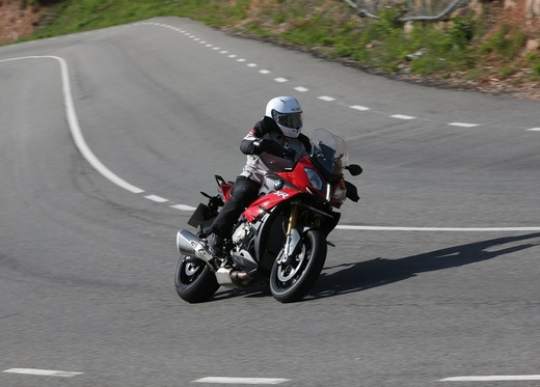 Clearly, this block does not lack niaque: filled to half speed, he began a very noticeable level at 7000 rev / min before leaving with raging between 8000 and 11 000 r / min! Must still find place to achieve these plans, clapping to the rhythm of the shifter, the crackling exhaust during deceleration, the melody of the valves of the air box. It grows hairy and it’s out!
However, the approval ride use remains perfectible: the engine pretty scrap at low speeds, the selection appears dry and – above all – many vibrations tarnish the use stabilized gait, between about 50 and 120 km / h.
Regrettable, especially as it accepts block well enough to roll on the couple or descend at low speeds and depart smoothly. Although not as sweet as that of the Kawasaki Versys, it authorizes use ride, but flourishes in sport pace.

Important development that characterizes this 2015 novelty: the introduction of a new Pro ABS designed in collaboration between BMW, Bosch and Continental. Surely, this device is stunning efficiency. It works with the sensor box (CPU which includes information from the sensors) located under the seat and takes into account the degree of inclination of the motorcycle.
In use, you can brake hard on the angle without losing stability: really impressive. The rebound that is usually perceived in the brake lever is present, but not very sensitive. However, it is perceived during braking relied on angle.
No doubt that by taking confidence in the system, it tends to slow increasingly strong curve. But be careful: as successful as it is, the ABS Pro can not do anything against a plate on the gravel path … prudence must remain queen. 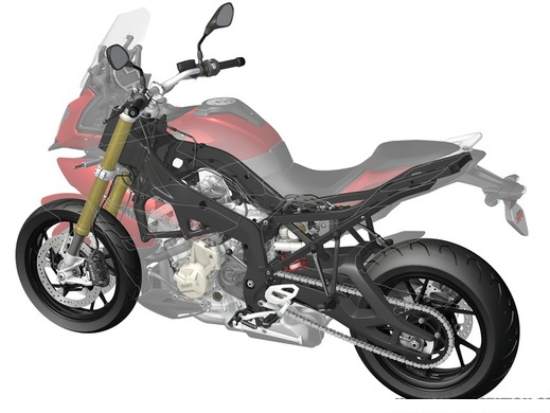 Other assistances offered on S1000XR are just as successful as we are accustomed BMW. Easily detachable handlebar, ASC traction control is sufficiently transparent to not interfere with driving pleasure. Dynamic ESA adjusts depreciation, including duo, but the preset modes (Road, Rain or Dynamic) already offer highly relevant settings.

As the kilometers, we finally find the flaws of the new S1000XR, which are not many. Although the protection offered by the wheelchair manually adjustable bubble finally appears better than what we imagined.
In pace “German motorway”, it still preserves vertebrae and relieves head and shoulders. A slight flutter has shaken hands, but it is very decent for a sports GT.
It is ultimately based on parameters like home rather limited passenger (too narrow saddle) or the tendency to really unfold as pace – very – high that we manage to identify the new BMW S1000XR.
It is closer to a Yamaha MT-09 Tracer as a 1000 Kawasaki Versys or BMW R1200GS obviously. The cursor is still more oriented toward sports than pure tourism, with passenger and luggage. 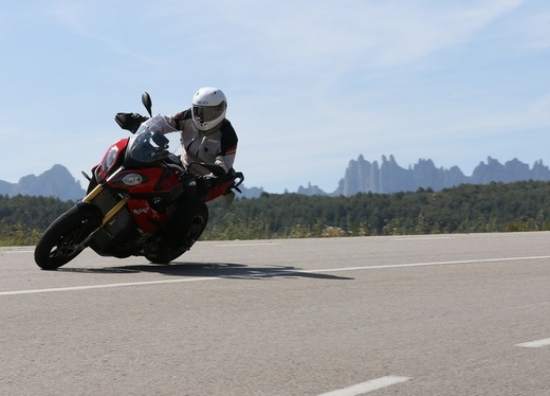 Sold € 16,200 without options, the BMW S 1000 XR does not miss its entry on the market. It can, as always with BMW, be embellished packs (Dynamic to € 1,000 or € 1,250 for Touring) to take full advantage of the qualities of the motorcycle: Dynamic Traction Control, cruise control, center stand or luggage carriers following selected options …
In addition, a lowering kit (€ 195) lowers the seat 810 mm for medium templates. Note that given the thickness of the seat as standard – comfort correct side moreover – it is impossible to offer in low version.
But it is a point of detail given the overall quality of the bike, which will be revealed frankly amazing dynamic behavior, very high performance, are some flaws in the approval that will be more or less sensitive depending on the tastes . 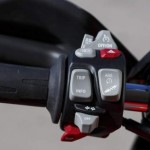 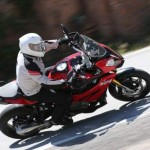 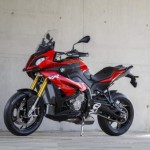 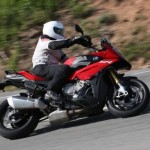 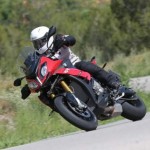 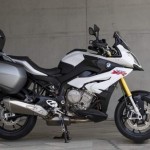 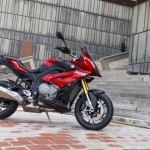 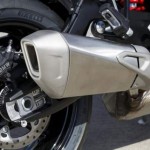 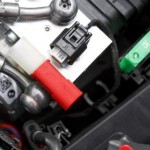 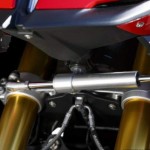 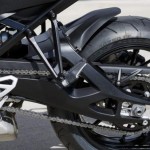 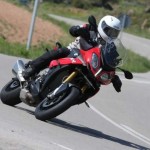 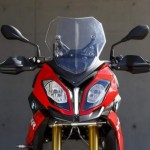