The least we can say is it has managed to be desired, the MV Agusta Turismo Veloce 800! It was not until this spring that the firm Varese finally allow us to ride with this sporty road which was presented for the first time in 2013 and confirmed at EICMA 2014, or at the salon SwissMoto the beginning of this 2015. Suffice to say it has an interest to ensure, beautiful: 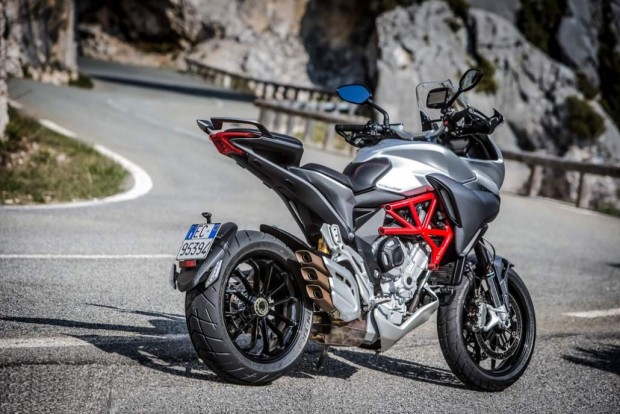 For the occasion, we were able to enjoy a part of driving more enjoyable as our starting point was at Saint-Jean-Cap-Ferrat in the Alpes-Maritimes (France). This beautiful region offers postcard views, but mostly very winding roads in the hinterland. Our tour of the day allowed us to not less than 230km enquiller through the Trinity, Tourrettes, Vence, Séranon Grasse, Cagnes-sur-Mer, … enough to highlight the dynamic capabilities of the Turismo Veloce 800.

MV Agusta therefore comes into the unknown with this Turismo Veloce, since the firm currently has no such model in its catalog. You may say that the 800 Stradale is approaching, but the latter is more typical Hypermotard that road, just as is the Ducati Multistrada Hyperstrada face. Finally, we are not here to talk about Ducati, but rather of MV Agusta, the Italian brand that rises and now offers even more endearing motorcycles, but especially powerful and sexy bikes. After all, is not that what we look for in an Italian? 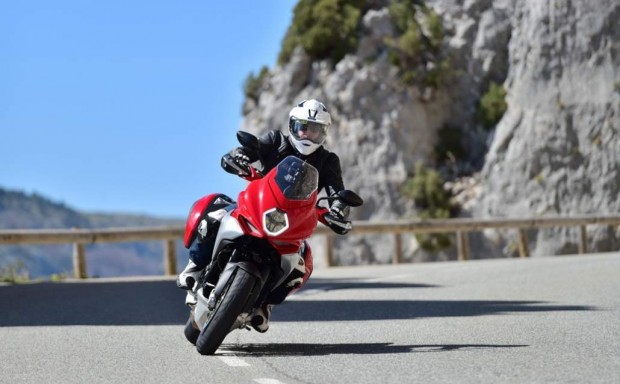 A Unique Style and Figure

Aesthetically, admittedly, the Turismo Veloce is quite successful with very fluid lines and curves, less aggressive and less than Multistrada finally sickle that its competitor direct the Yamaha MT-09 Tracer. The technique is always the same for this type of machine, trail (just the name!) Leggy but fitted with rims and tires 17 inches, which ultimately gives us a sport-touring.

A unique style with a single headlight and a superb fully LED rear LED light also. We also denote the front turn signals and nightlights day perfectly integrated in the hand guards. So we no longer talk unsightly orange flashing exceeding either side of the bike.

The steel trellis frame accentuates the sporty side of the bike, like the perforated front fender or motor-shoe giving some basis for the VM. It must be said on this bike, although high on legs (850mm to the saddle) is not made for the land, especially as it would be a shame to spoil the beautiful sticks rims, the back being supported by a single arm.

The attention to detail is very thorough, as usual at MV, with a plate holder flush with the rear wheel and also including turn signals. During the presentation of the model, MV Agusta has been clear, this bike is to put in the sport-touring category and not in the trails. At least the Italians are frank with customers! 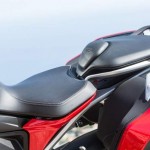 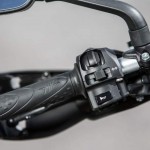 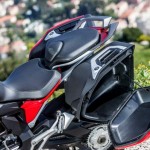 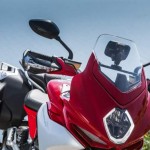 Once on the bike, the big guys like myself and meter eighty-eight will find themselves immediately at ease, almost like in a cocoon, because the seat is centered on the front and back on the tank legs. The posture of the operator is straight and wide handlebars offers excellent lever arm, which should be a more in urban operations. The stalks fall perfectly to hand and the brake levers and clutch are naturally adjustable spacing.

The rear visibility is provided by large mirrors. In short, the position is natural and will enquiller kilometers without a problem, especially as the culmination thick saddle 850mm height should offer excellent comfort.

Side protection, bubble before is height adjustable on 60mm and, with one hand; well, no need to stop to unscrew two wheels or have to go out a toolkit. Everything has been thought to travel in peace.

Equipment and comfort, MV Agusta contains the recipes that make the success of current models with a dashboard with a TFT color screen five inches diagonally. The latter is the most complete and he may miss the TV and GPS to believe at home. That said, an external GPS is optional (Garmin Zumo 390). The screen on the dashboard has Bluetooth technology that lets you connect your smartphone, intercom communication system or GPS. 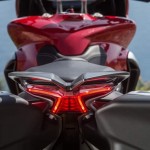 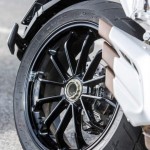 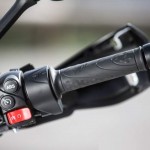 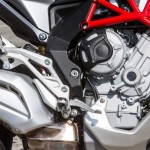 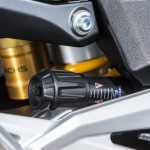 Everything is perfectly legible and easy to handle, as the new traction control or the quickshifter EAS 2.0 with the ability to go up and down reports on the fly without touching the clutch lever. In the basic equipment, we also have heated grips, a speed limiter and cruise control yet. Among small intentions, we note the presence of three cigarette lighter sockets, two 12V and a 5V.

Enlarged to see the animation of the counter!

Storage side, we find two small areas just behind the bubble. They are large enough to stay there a keychain. Large bags of 30 liters volume each are optionally available, simple to install and remove … enough to travel comfortably, alone or in pairs.

The finishes of the Veloce are almost perfect. I note that adjustments, quality plastics and paint are of a very high level. Surprisingly, a great effort has been made about hiding son. Usually, the Italians do not bother with this kind of detail … there, everything is some thoroughly camouflaged and adjusted. 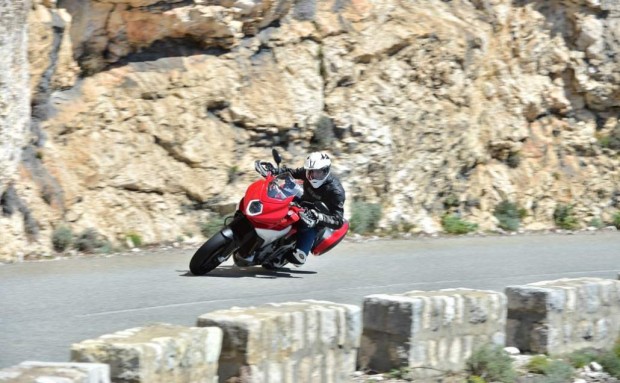 For the occasion and to become one with the skills of the Veloce, it was reworked and brought back to power 110cv. However, it now has a couple extra ladle of 15% compared to the Rivale and Dragster. The “tre pistoni” has new pistons and new camshafts, a change which is found on the next new models. MV Agusta not announce least nineteen new in 2020. That is said!

In addition, and in order to adapt better to the conditions and to the steering of each, the engine also features four mappings (Touring and Rain limiting the maximum power of 90 hp to 110 hp Sport Custom and where everything can be customized). Some settings are customizable: these include the engine torque curve over the power range (two levels), the rev limiter mode (action more or less incisive), the sensitivity of the throttle (three levels) the brake-motor (two levels) and the response of the motor (two levels). The setting of these modes is very easy and is done primarily via the stalk on the left, a push select what you want: ABS, mapping, TC, To confirm the selection of mapping, it will primarily start the engine and press the starter to change the mode. This adjustment is also possible by rolling. 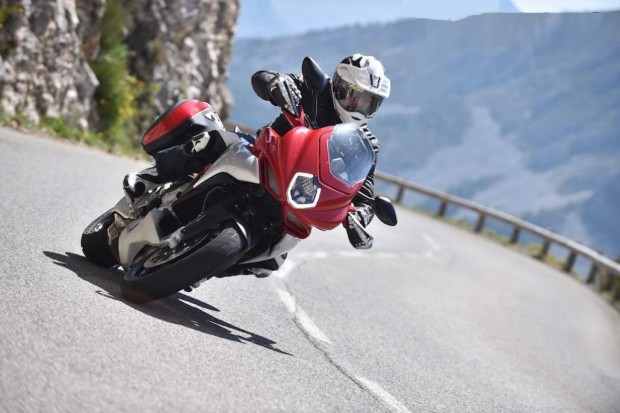 Presenting the bike is good- Riding with is better

The first kilometers are in town to judge the agility of the Veloce. It is very easy to handle. Urban slalom, framed by the MV staff, is a real breeze. The high position allows to see over cars, and to anticipate the maneuvers of last second of some unscrupulous drivers …

Although qu’accusant 191kg on the scales and with a rear tire 190, the bike is played changes of course at low speed, the weight is in any case felt. The clutch hydraulic control provides excellent feel and is an exemplary flexibility. Fortunately, because it took us more than thirty minutes to get out of town! The engine is free from defects in this exercise. Helped by a typical gas control ride-by-wire, he was very flexible in the “Touring” mode and offers the possibility of cruiser 50km / h in top gear without causing a sudden, This was for example not possible on the Dragster model fussiest motor in this exercise.

The hills appear, finally, it’s time to see if this Veloce is just as it is called!

The first kilometers are under the sign of learning. Despite its ease some testers already fall behind after fifty kilometers, forcing the MV staff create two groups to avoid penalizing the most dynamic journalists. So here I am in the first group, the rate increases again and I noticed that the bike is incredibly easy. 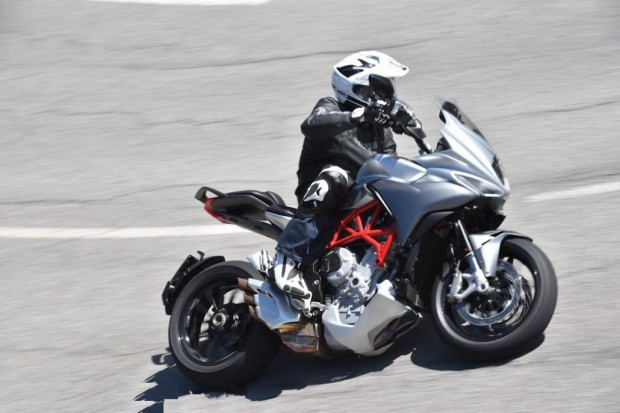 Exit mode “Touring”, I prefer the “Sport” mode. The difference between the two maps is present: the engine response is more frank and revving are easier. Like what, 20hp can really make a difference. The rpm increase rapidly and the red box to 11’000tr / min reached rather quickly! Three-shift lights indicate that you should change reports, in case you forget, as the motor show voluntary. The pin outputs can be done without problem on the second report, the bulk of the cavalry arriving to 5’000tr / min.

Besides, the gearbox shifts is done on the fly, both amount and descendant reports, thanks to quick shifter EAS 2.0 (Electronically Assisted Shift). The gearbox cash without flinching. This may sound like a gimmick to some, but to be used throughout the day, I can confirm that it is nice not having to disengage each upshift or down. That said, this system shows its low speed limits (less than 50km / h), causing some fake dead spots.

The turns are connected and are not alike: pins, long, short, bumpy, questionable coatings … We eur insight wave of the roads in the hinterland. This has the advantage of being able to judge the suspension. MV Agusta has chosen to equip its Veloce a set of Marzocchi 43mm telescopic fork for the front and a Sachs shock for the rear. 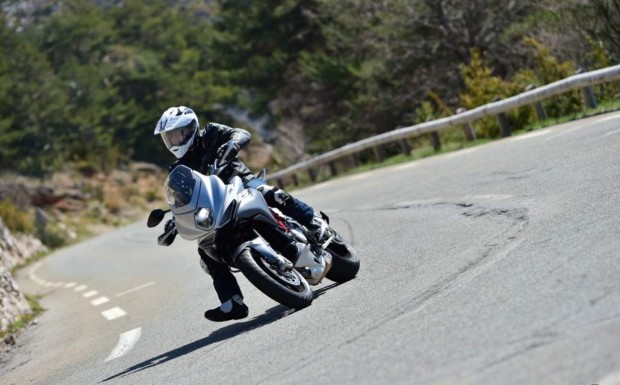 Thanks to its equipment of choice, the bike is very playful and wins vivacity.

Left-right, angle changes are becoming faster and follow. The air rises Pirelli Scorpion Trail also take a lot of angle and gives confidence in this highly abrasive tar. That’s it, my driver reflexes supermoto stand out, as my foot looking rope bends of the approach. I love! Heavy braking (ABS off) allow me a beautiful slide from the rear; the second, I’ll see if the bike is willing to take the angle at the point of posing a knee, done! 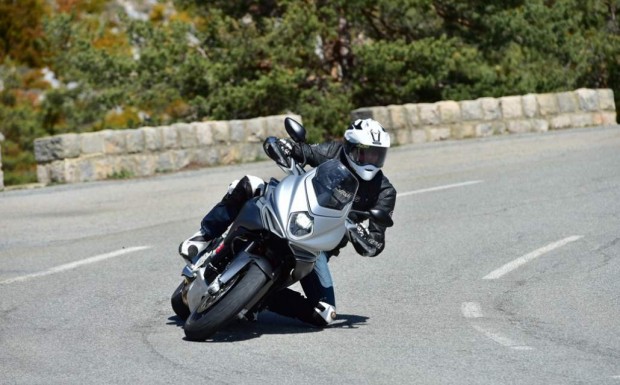 Turns continue and motor shows that is present. The raucous sound of the three-cylinder is nice for both the driver and the journalist who follows me. Reversals out of corners with ease and are put Pirelli undermined. Traction control continues to illuminate, certainly tell you that you go a bit much … Fortunately, once set to one of the first three levels, this inconvenience fades and you will continue to send Gas!

Of course, who said braking acceleration, and signed Brembo brake system with two 320mm front discs clamped by four-piston radial calipers offers great performance. All my brakes were made a finger is that braking is powerful and it offers a great feeling! The rear brake is anecdotal and is only used as retarder. ABS is powerful, but remains an ABS; repeatedly occasions he is engaged when braking downhill, even in the most permissive setting level. As a result and in order to take full advantage of the excellent chassis, I switched to “OFF” all day. 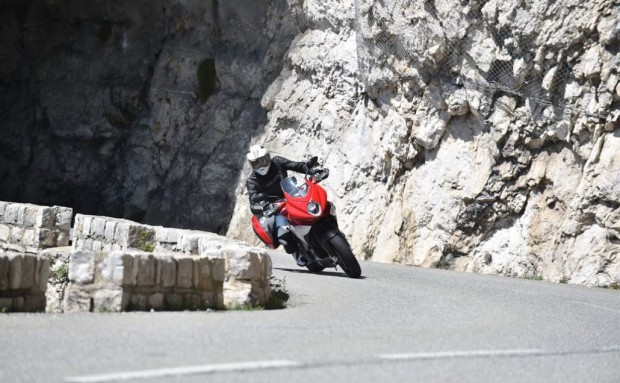 The return will coolest way the frugal lunch we have a little stunned. Finally, it will be the opportunity to enjoy the qualities “touring” the Veloce, without driving the knife between the teeth. It confirms what my feelings during my test. Comfortable, efficient, generously motorized and playful. It does not trap and lets have some fun without any apprehension.

An important aspect, too, is the gas mileage. It has stabilized at an average of 8.9 liters per 100 kilometers. Wheelchair normally without spinning the right handle, average consumption can easily flirt with 6 liters.

I can describe this Turismo Veloce really slick! I had a great time at the handlebars, in all situations, downtown, Fashion Fowler like ride. In handling very easy and healthy behavior, it is also for novices in motorcycle sport-touring. For experienced bikers, she offers a high level technology package. In addition, aesthetically, it is one of the most enticing motorcycle market and for those who wished more electronic, it exite a version “Veloce Lusso” with a semi-active suspension version Unfortunately this part of the press presentation.