You asked your questions to our special envoy Michel Turco at the end of the Grand Prix of Austin. Here are his answers… 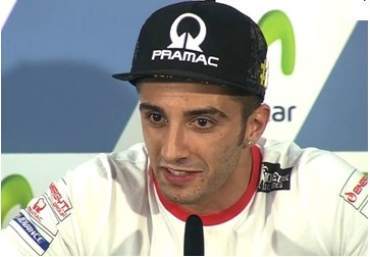 Q. by Aymeric: Why the pilots jump on their motorbikes at the time of release the clutch to start?

Aymeric, you have certainly never had a battery problem… Put a kick ass on the saddle, this is what everyone is trying to start his motorcycle to the stroller. It helps to grip the rear tire to defeat the compression of the engine.

Do we know if the motorcycle N ° 2 of mark making the pole was set rain or dry and what has happened to his motorcycle No. 1?

Mark explained have made his pole with a somewhat less well regulated bike and a soft tire forward then as his bike n ° 1 was fitted with a hard tire. Tire with which it felt better to attack. This has not prevented to stick three-tenths to everyone before saying: the bike was less well for only a ride, it was still going and Yes…

Think you that this year Valentino Rossi has a chance to beat Marc Marquez to the regular because without his mistake at the first corner of the Qatar would likely also won? Believe you that mark would be able to do the same times with a Yamaha?

Beat a driver who made mistakes is also part of the race. The regular, mark and his Honda are strongest. To beat Marc, Rossi knows he must now rely on a lack of success of his opponent. Later, impossible to know if mark would do the same times with the Honda. Its cockpit is today perfectly adapted to the specificities of the RRs, this is also why the other Honda riders are struggling to operate as it does. If he was on a Yamaha, should of course to amend its management. Seen with Espargaro moving a bit like him, the Yamaha does not work when on the violent in corner entry. It would certainly capable, but say if it would roll also quickly with the Honda, I me there would suggest not

Q. by Joëlle: Can we have some info on testing with Michelin for the different MotoGP?

Development work continues. Edwards and Pirro drove to Texas after the Grand Prix, and he will be again on the track in Argentina next Monday. Conditions was not terrible in the Qatar as to Austin, the chronos to communicate, that person is permitted have nothing significant. At Michelin, we sure have today defined the profile and the construction of the 2016 tires and told now work on mixtures of gums. For info, the official drivers will roll all with the Michelin at Mugello after the GP of Italy.

Q. by Thierry: From after the results and comments from Johann Zarco and Laurent Felon, I have the impression that this duo does not develop a synergy positive and winning. Would it be unreasonable for Zarco to find a worthy of the name coach to exploit his driving skills that are indisputable?

Zarco has no need of Fayez to exploit his driving skills. Laurent has also planned to take back next year to take care of his son Lorenzo who will begin in Spain. Without Fellon, Zarco would certainly not have the career that is hers today. The relationship between the two men, who are also associated with the ZF Grands Prix structure level, evolves with time. Johann is today more independent that it was last seasons. Like everyone, the boy matures at its speed. Season results attest in any case it is on the right track.

Q. by Chup: The resurrection of the Phoenix Rossi is due to his talent, his team, his front tire (more effective braking), to his motorcycle or a little while both? Or may be things to discover for us?

Difficult to speak of resurrection… After two seasons complicated with Ducati, Rossi has put a bit of time to find his marks with the Yamaha. He crossed a market last year, thanks in part to his choice of change of Chief Engineer, and he confirms this season the progress seen in 2014. To do this, it also benefits from the evolution of its R1 and a better understanding of a machine that had changed between 2010 and 2013. With the front tire, it is the same for everyone, and this is precisely a problem for him. Austin, on a circuit where the Yamaha has a dirty tendency to understeer, Rossi has degraded his very quickly and nothing could not cope with Dovizioso.

Q. by Olivier: The loss of two litres of gasoline does not appear to have disrupted the functioning of the Ducati engine. Can they lose other benefits by the end of the season?

The Ducati have never used 24 litres. Until Qatar, they were between 22 and 22.5 litres. Therefore, the change is not colossal. If the GP15 wins three Grand Prix, it will have to make further concessions in terms of fuel and tyres. Use less fuel then could have more impact on his behavior. Deprive it of soft tire would eliminate his advantage in qualifying but offered more solutions for the race, the harder tyre does it sometimes not being enough. And most importantly, it could finish the Championship with its twelve engines, which remains its major advantage against the competition. Dall’Igna can afford to take more risks in terms of performance than its Japanese counterparts.

Q. by ISA: How can we explain such domination of Danny Kent in Moto3, both testing and race?

Kent is a very fast driver, but also one of the most experienced Moto3 Championship. On the other hand, the Honda is at the top and his team probably found the right settings, Vazquez also having him very well rolled. In Texas, it was the day of Kent.

Suzuki were well born air, but can they catch Honda, Yamaha and Ducati by the end of the year?

The Suzuki is progressing, but it would be very difficult to climb to the level of its rivals by the end of season so his motor disability remains important. The team of Tarada and Brivio hope also not lay claim to the podium before the next season.