In 2013, Honda intends to reinvent mythical Dax with the new Honda MSX 125. We tested this very small motorcycle which completely intends for an urban use fun. A large toy which could allure broad customers well, of the beginner connected with the user camp-site because… 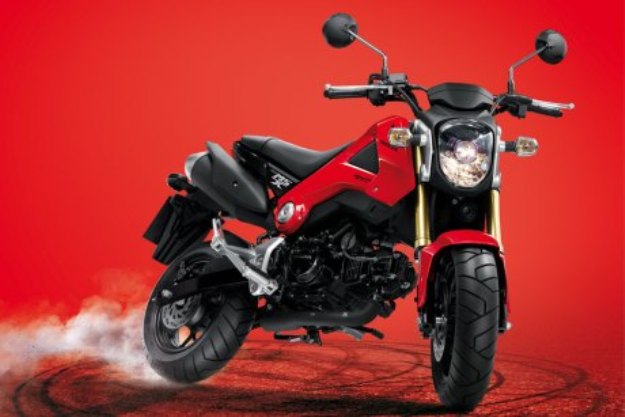 Whatever the container, provided they have drunk … To have fun on two wheels, it is not always useful to have a three-digit power or data sheet worthy of a stealth aircraft. The new Honda MSX 125 2013 is, however, in counting, simplicity and lightness to show more enjoyable and fun as possible.

In the line of Honda Monkey, Dax or ZB, mini motorcycles dedicated to roll downtown or on short distances, the Honda MSX 125 comes to take seat on a market of the 125 Cm3 which counts much more utility motorcycles than of entertaining machines. Here, Honda seeks to join together the two kinds by resurrecting a myth on two wheels: Dax! 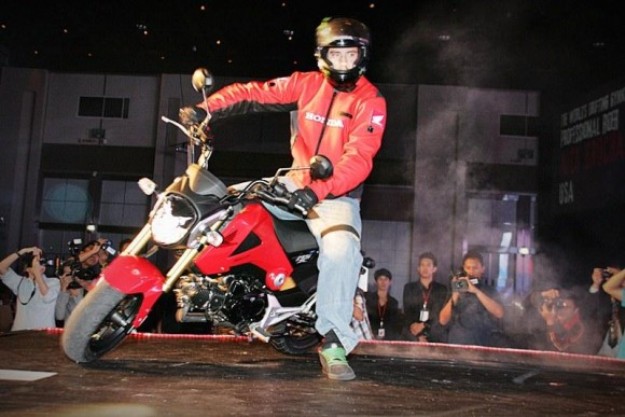 Modern to the instrument panel

Admittedly, if Honda MSX 125 is faithful to emblematic Dax in the spirit, it does not resemble to him any more. It raises a modern line, with a preparing rather rigorously assembled and perfectly with the last style, with the image of the very neat headlight with its lens of blue position. The instrument panel is also with the mode with a digital display. With this pace of toy, one wants only one: to climb above and leave to make a turn!

In fact, with such a gauge, the MSX does not intimidate fewer worlds. As of 1.60 m, it is possible to flat pose the two feet on the ground and to rise of the crutch 103 kg all full facts prove to be a formality. A pressure over the starter and the small one-cylinder 4-time used on hundreds of thousands of Honda utilities is banned. Discrete, it will not awake the neighbors in the middle of the night. 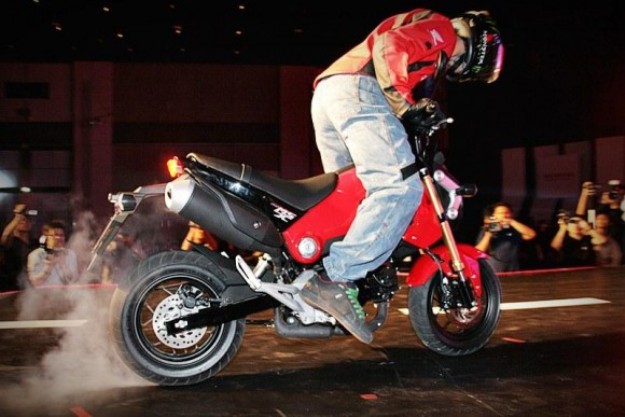 The orders (clutch and selector) handling itself with ease, the catch in hand is a formality. It is as true as to roll on a so light machine allows to catch up with many “perilous” situations like a bad shoring up or a foot slipping on a paving stone with the stop. Another point strong of urban use: a turning radius worthy of the best scooters of dispatch riders! Honda MSX threads with a remarkable ease and the interfile becomes almost a game.

Nevertheless, the large gauges will have to be imperatively moved back on the saddle not to be likely to find itself with the knees in the handlebar, but one made there quickly. Attention also, on board Honda MSX 125 2013, you really sat with the short-nap cloth of the bumpers of the large 4×4 and other SUV with the mode and you are likely to be less visible in circulation.

Remain that very, very quickly, the desire for playing gains you: impossible to remain wise with the handlebar of Honda MSX 125! Jumps of pavements, departures in waterspout, meetings of skids, one wants to only have fun, the more so as the feeling of control which offer its weight reduced invites to defy gravity the more so as natural ergonomics with a very high handlebar consolidates this impression. The small wheels of 12 inches fitted of V Rubber – with very correct adherence in addition – exacerbate the agility, at the point sometimes to generate a light blur with the catch of angle. 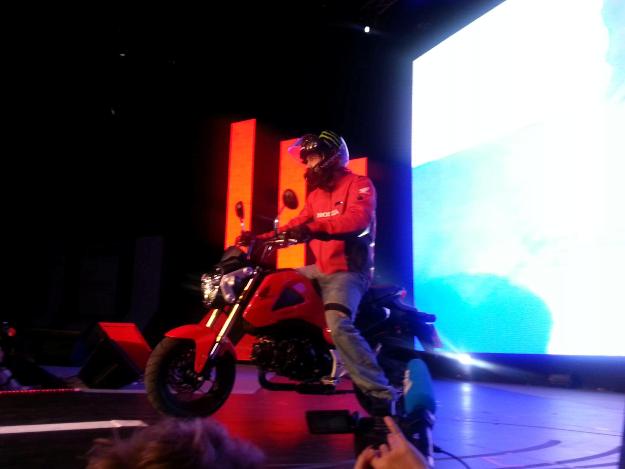 If Honda chose to assemble its Honda MSX 125 in Thailand for a question of manufacturing costs, the Japanese giant therefore did not neglect his hobby horse of it: the security. One thus finds two discs of brake and the clamps Nissin made Japan, effective even if their proportioning is a little ON/OFF.

With 9.8 horses, the small one-cylinder one of 124.9 Cm3 is shown sufficiently alert to start in security on the boulevards. Equipped with a gear box with only 4 reports, it offers a sufficient flexibility to survey the small streets in second or third and it agrees to begin again with 2,500 tr/min. Should be reached approximately 55 km/h to pass the fourth and to find themselves in the beach of mode of comfort.

The weight ratio/power of Honda MSX 125 2013 is finally more speaking that its power announced and in spite of ten small ponies, the heiress of Dax never gives the impression to be under motorized… as long as one remains downtown or on the peripheral. 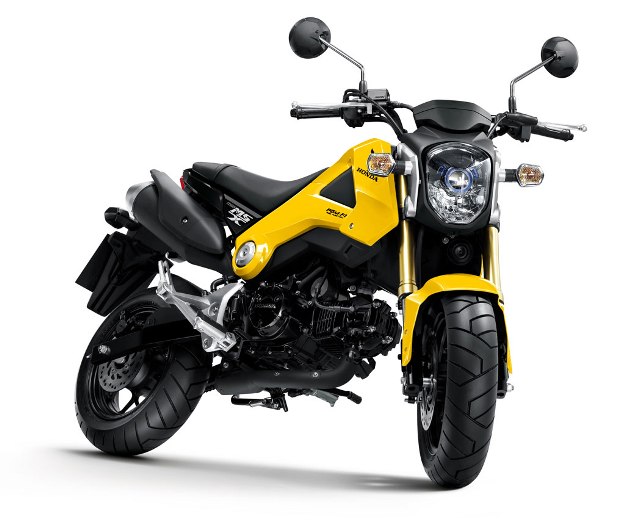 One had to expect it, but Honda MSX 125 shows really its limits on fast track and motorway. Pushed in its ultimate cuttings off – 8200 tr/min for 109 km/h meter – the small one-cylinder one vibrates and means clearly that its cruising speed is around 90 km/h. What excludes almost any inclination from going beyond on fast track?

Moreover, with its ultra short footing and its small wheels, the directional stability at high-speed is not the strong point of Honda MSX 125. And if general comfort remains sufficient, the suspensions rather quickly acknowledge their limits on the shocks, small and large. Lastly, certain gaps of equipment would deserve to be corrected: no hazard lights and nothing to take along a theft protection device in spite of a face if attracting. 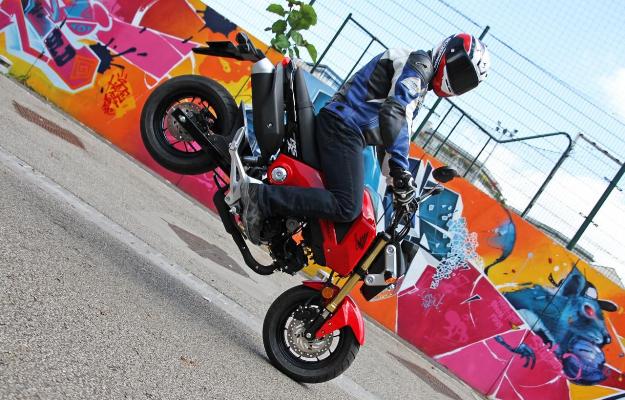 Assessment: A remedy for the moroseness!

With the Honda MSX 125, Honda really dissociates itself on a market turned overall towards the utility. Much more fun, light and easy to arrange That MOST scooters, Honda MSX125 at least shows itself as at ease as the basic downtown motorcycles of 125 Cm3.

What one retains of this small motorcycle, it is incontestably its ultra lucid control which will bring pleasure at the time as of ways daily newspaper. Its gauge of pocket and its reduced weight make a machine fun of it, but, other sides of the coin, the large gauges will feel there with the narrow one.

And attention if you think of rolling in duet because the saddle is short and the maximum loading recommended by Honda rather low: 154 kg. Sold 3,040 €, Honda 125 MSX remains a little expensive taking into account its altogether rudimentary technology, but its control makes of it a motorcycle really attaching. 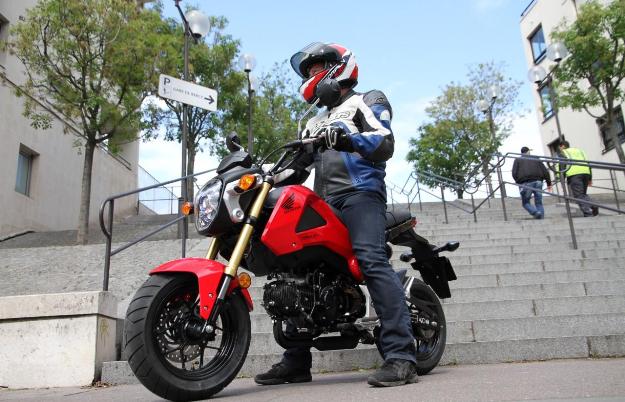 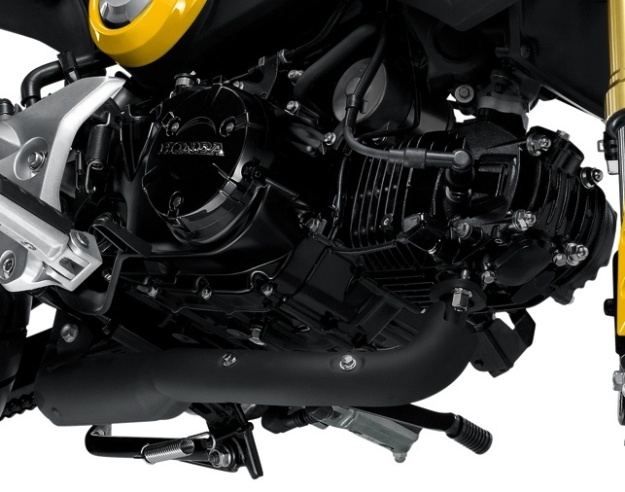 The Honda MSX 125 of Honda rests on a well-known mechanics, resulting from a long line of utilities intended for the emerging markets. Derived from Innovated from the engine, the one-cylinder flat Almost one point out of That Honda Dax and ZB.Cooled by air, having a simple camshaft actuating two valves, it is rather rustic. Rather little pushed, with a compression ratio from 9.3 to 1 and one power of 9.8 horses, it should be reliable.

Standards of pollution oblige, it is equipped all the same with an electronic injection PGM-FI, like Honda of big-engine car. Honda recommends a passage to the workshop every 4,000 km, especially because of the low oil capacity (1.1 L) of this small engine. To often drain is in any event a warranty to preserve it very a long time in perfect health.

Side consumption, one reaches average extremist there low. During our test, the Honda MSX 125 was satisfied with 1.7 l/100 km, whereas we did not spare it and that its engine was not even ground. The average consumption announced by Honda about less than 3 l/100 km is completely realistic. 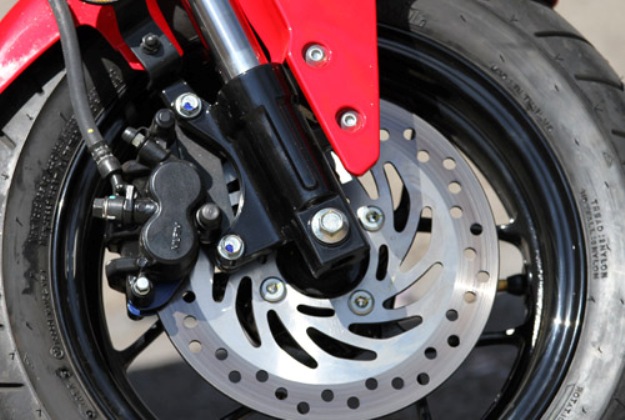 Under its preparing which gives him volume and an original pace, Honda 125 MSX hides a classic tallies steel beam onto which a loop is welded also postpones out of steel.

The front suspension is entrusted to a reversed fork 31 mms in diameter: one finds larger on certain VTT! In the back, a mono shock absorber is found. These suspensions do not comprise adjustments and clearances are reduced. Braking is entrusted to two discs gripped by serious Nissin clamps. No ABS with the program however for the moment.

Pneumatic signed V-Rubber goes up asks for a certain time of heating, but adherence offered is satisfactory. Important taking into account philosophy fun of the machine which will see more than one owner controlling his motorcycle in an enthusiastic way…. We weighed Honda MSX 125: 50 kg for the front part, 53 kg for the back part, are 103 kg all full facts for 101.7 kg announced dry. 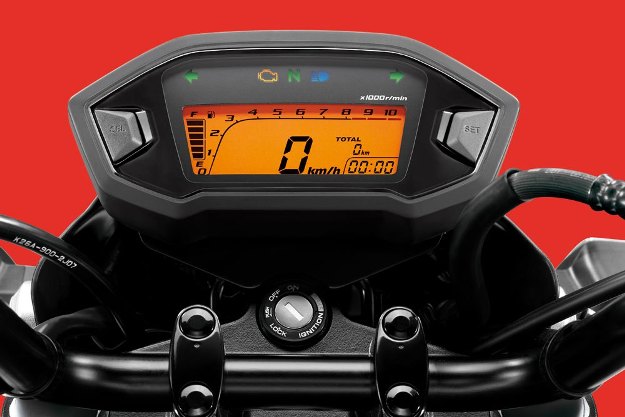 Parliament in Thailand, Honda MSX 125 presents a very acceptable completion. The plastics of the preparing are well adjusted and supported our ill-treatments well. The MSX obtains an instrument panel derived from those from the NC 700 and CB 500, with a gauge with petrol, two partial trips, a clock, in short the essence of the daily newspaper.

The rear view mirrors are of good quality and vibrate very little; the warning signal is shown like often rather weak sound volume question. Pleasant small detail, Honda with thought of equipping the wheels with 12 inches of valves bent to facilitate the pressure control.

One will however regret the absence of the warning and trunk under the saddle to carry a theft protection device worthy of this name. Because with a so pretty face and only 103 kg on the balance, Honda MSX 125 2013 will be very trying and easy to utilize. 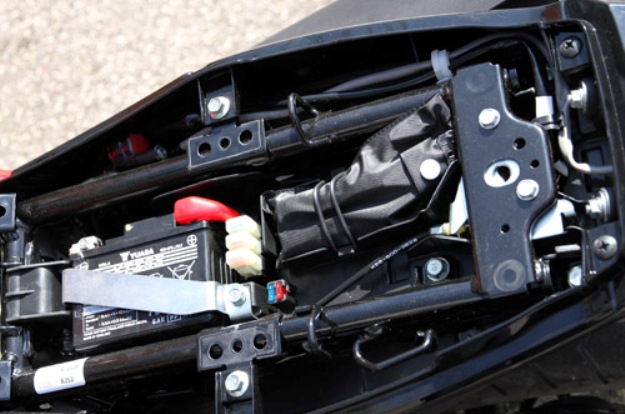