With great enthusiasm has been the official Suzuki of MotoGP team after his absence from the Championship several seasons. The team called ECSTAR Suzuki MotoGP Team, taking the name of this Japanese manufacturer of lubricants.

The final aspect of the Suzuki GSX-RR 2015 is very similar to that we have seen in the test in Sepang, where Aleix Espargaró and Maverick Vinales managed good results waiting to get more power in your inline four-cylinder engine. At the moment it is equipped with pneumatic valves, but not change seamless, so the room for improvement is great. If they have the resources to do so. The chassis is girder of aluminum, the Brembo brakes and Ohlins suspension.

Aleix Espargaro is the first opportunity as a pilot officer after three years, achieving great results as pilot CRT and Open respectively. It is the spearhead of the project and the aim must be to stand just behind the Honda, Ducati and Yamaha official in the least possible time. In the case of Maverick Vinales it faces its year of rookie in the category, but after his great year in Moto2 also as debutant should not be ruled out that with his talent he shortened his difference from Espargaro in the course of the season. Be compared with Jack Miller to measure its progression.

Davide Brivio is sporting director, as man led Valentino Rossi in his best years in MotoGP and therefore also a warranty in the box. Feel like there is from as well do so and end up with the Honda-Yamaha team, although that may not be possible until at least 2016.

A few hours after Aprilia, it is the turn of Suzuki – who also makes his return to MotoGP this season to unveil its new colors for 2015. As the Italian brand, the Japanese firm not overburdened as sponsors since Ecstar is a brand of lubricants which belongs to him. The ambitions of the Japanese are however higher after good tests for Aleix Espargaró and Maverick Vinales at Sepang. 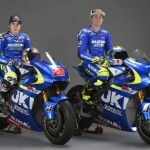 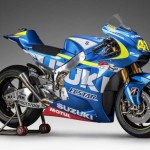 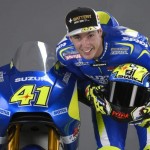 “Suzuki is finally back in MotoGP, in the category of motorcycling. Thanks to our commitment to the highest level, we can refine our technologies and transfer them to series models so that Suzuki’s worldwide customers can enjoy. Suzuki wishes to satisfy its customers around the world, both in competition with our products. We hope that our fans will support the Team Suzuki Ecstar”.