The Aprilia Caponord Rally 1200 is a consolidation of the now strong Aprilia range of three versions of the big twin trail. Wire wheels, new exhaust, improved protection and luggage in series. 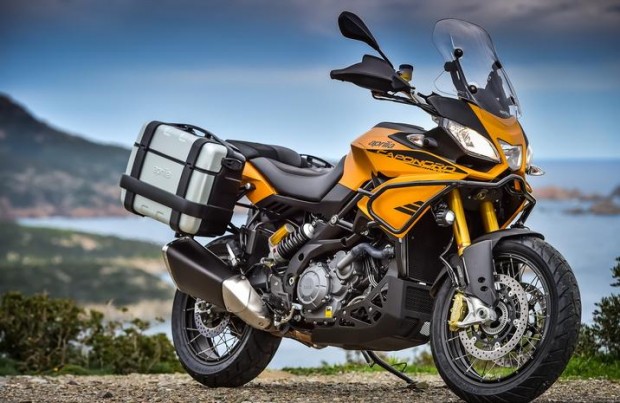 the new 2015 made significant progress in behavior as pleasure. What revive a rather shy career? Here’s our verdict after a trial well arrose. Mercredi February 18, 2015, testing the 1200 Aprilia Rally Caponord two years after the launch of the first 1200 Caponord. We are back in Sardinia, almost on the same roads and again with the rain! They are really strong leaders Noale.

However, do not spoil our pleasure to discover this new, full of ambition, which is responsible for boosting shy career of big Italian trail, where sales remain well below the objectives of the Piaggio Group: 102 units sold in France in 2014, against 373 Ducati Multistrada 1200. Not to mention the German juggernaut BMW R1200GS and 2098. 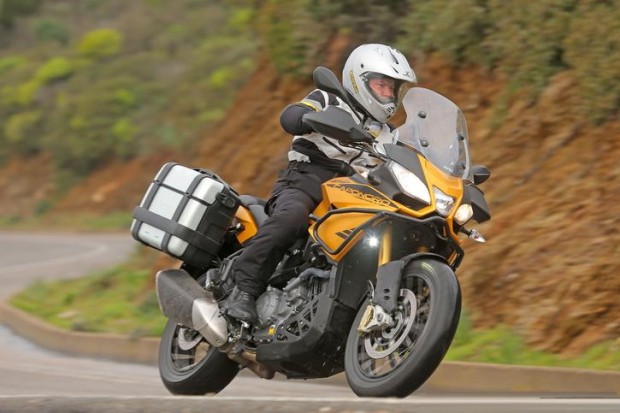 However, the Aprilia officials do not show themselves more feverish than that. An engineer slips us before leaving us to climb in the saddle, “too bad for the rain, you’ll see that our Rally demonstrated excellent qualities.

More of the Same

No changes to report next life on board. The non-adjustable seat always rises to 840 mm, but is well dug and drivers more than 1.75 m fared no problem. Handlebar, 24 liter tank and footrest are identical to the standard version, contrary to what was expected of a Rally variant designed for hiking all the way.
The interface is also very relaxed and it starts from the end of the four fingers of the left hand because the clutch lever is still closed. Too Bad. The first meters are reassuring, thanks to an always satisfactory at low speed balance. The wheels 19 and 17 inches and reworked steering geometry accordingly ultimately did little to change the grip. 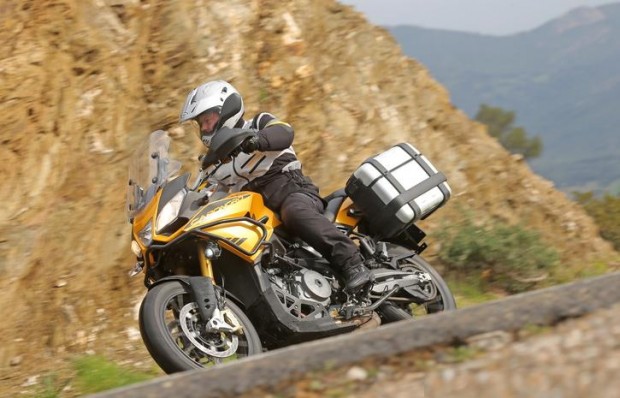 In addition, the Aprilia Rally Caponord always shines very well and its center of gravity is less high than many of its competitors. Half rounds are without apprehension after ten minutes despite a dry weight of 238 kg manufacturer data.

But most of the changes to the chassis is the mechanical evolution that is felt more. Thanks to the work done on the exhaust manifold, including a new plenum gas for the rear cylinder available as an option on the Caponord 2015 V-twin 90 wins round and flexible and allows for down to 70 km / h in sixth without complaint.
It has almost no hole at low or mid-range, especially in the very usual range 3 500 to 4 500 r / min which he accused a significant weakness. The ADD Caponord had suffered in our comparisons. Reversals are more frank, and it participates in the general approval of the engine full of flavor. 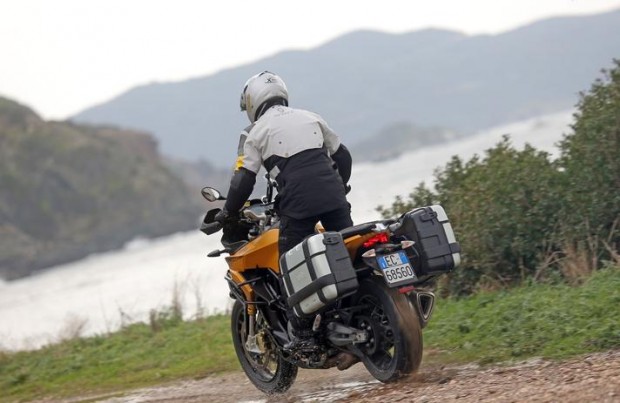 Growling exhaust that only Italian motor do know homologous version, vibrant just right, distributing torque of 11.7 daN.m very generous in sensations, this engine gives the feeling of being very muscular in its free version of 125 horses.
In addition, his most significant inertia that other blocks of the category is ultimately enjoyable. It can boost at low engine speeds without having to polish the clutch as the engine super lightweight flywheel. And it has a real engine brake to adjust its speed to the environment. A real pleasure on winding and wet roads of Sardinia.

Rally on Every Road

But if you have to brake on wet, no problem: the ABS is standard, as is the adjustable ATC traction control, adjustable mappings or semi active suspension ADD. Technological arsenal certainly becoming more common, but still significant in tricky conditions.
During braking and acceleration online, the Aprilia Rally Caponord almost no risk of sending you to the mat. So, we took the opportunity to gauge the potential of the advanced-chassis. With typed trail rims and excellent Metzeler Tourance Next, the 1200 Rally Caponord shows almost more evident in the sinuous than the standard 17-inch wheels. 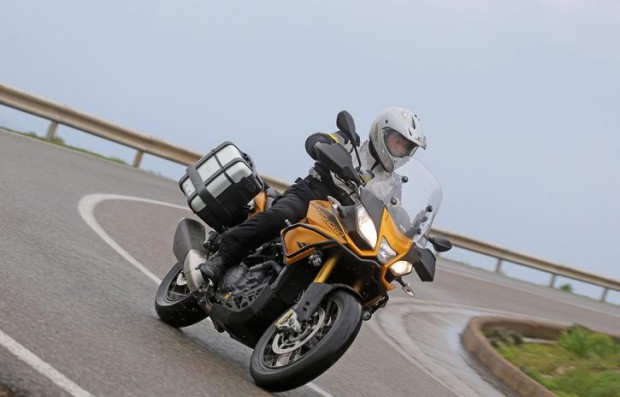 The inclination is easy and Rally is more neutral cornering. Understand by this that she is reluctant to take less of the angle, keeping its path and rises less on braking in corners. With a rear brake ounce for the sit, it provides a very good feeling when cornering.
However, Caponord Rally still lacks the science of improvisation Road Queen R1200GS or architecture if successful. ADD suspensions of road feel, however, proves to be more than respectable. With no doubt, like the standard version, the Rally savings vertebrae. 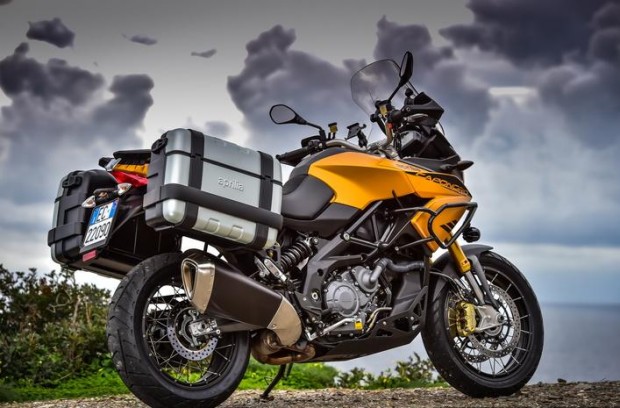 Good, and hiking all the way then? It will not be the argument number 1 Caponord Aprilia Rally 1200, due to inadequate ergonomics to conduct standing with a too low handlebars. Nevertheless, stony paths remain accessible to him as most bikes in this category.

Back on the road, the Rally Caponord expresses its vitality, with this strong character that makes it so endearing. This is certainly one of the most vibrant motorcycle category, and it also enjoys good coiled pace than the attack. Beautiful versatility this Rally! 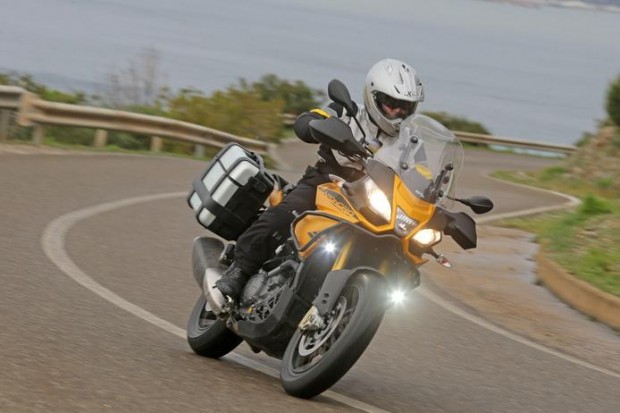 And she will not be afraid to take you away with improved protection for its more enveloping bubble, its standard side cases that remain very compact in the traffic, cruise control (basic) in series, a nice side table and Aprilia Multimedia Platform that connects your smartphone to the bike to increase the information received.
Rally become the 1200 Caponord still offers an interesting package. What a pity therefore have removed the standard equipment the rear fender and center stand that come standard on the Travel Pack ADD. There are marketing these choices perplexing, especially when it comes to restore momentum to a model …

Sold € 16,499, the Aprilia Caponord 1200 Rally is at the crossroads on the board of the big trails. Less efficient than the KTM and Ducati signed missiles, adventurer less than the BMW R 1200 GS Adventure, true to the chain drive … it differs in each road trail subgenres. 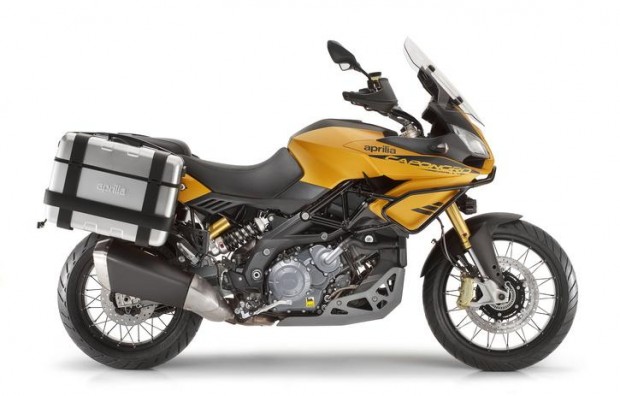 It nevertheless offers an interesting package with a rich equipment, honorable performance in terms of sportiness and comfort as a strong character. Let’s face it: this version of Rally increases the versatility of the standard model, as its engine certification. More balanced, better protection, rounder engine, it shows the will of Aprilia to move forward with its multi-purpose tool.
Small gaps remain: control farm clutch adjusting certain fastidious audience, unchanged autonomy and remains dependent on an average consumption among the highest in the category … But as in 2013, the Caponord remains an interesting alternative. 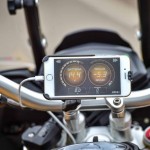 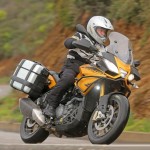 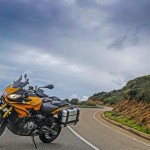 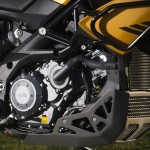 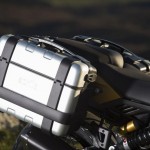 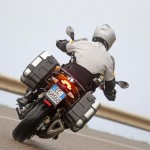 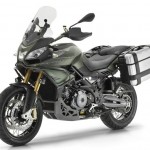 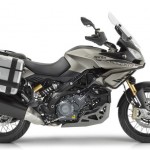