Fully revised, the BMW R1200R becomes sportier in 2015. A deliberate change allowing him to rub shoulders with new competitors. Including the Ducati Monster 1200 including even though, in the same time, the Fiery Italian has become more versatile. Two years ago, all opposed them, but today… 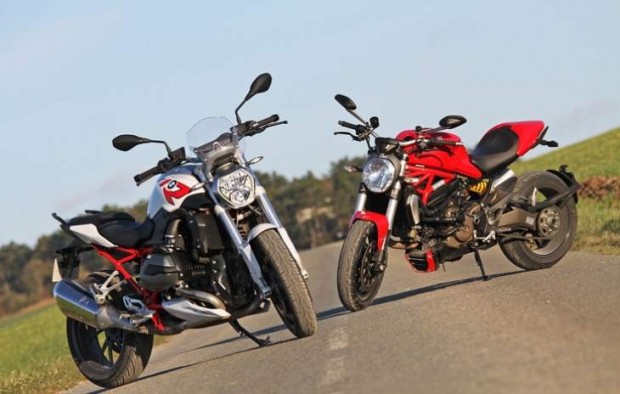 Passenger handles, adjustable seat height, flexible super clutch, more relaxed ergonomics: the new Ducati Monster 1200 had unveiled new practical aspects in the family at its launch in February 2014. This new generation of Monster announced so more versatile than ever, with electronic helpers in series, a larger tank enjoying autonomy and a better home for the passenger.

Sign of the times, the brute of the 1990s left its place to a good chic good sports roadster genre, more sophisticated and more expensive. The move upmarket is never the Ducati strategy, to better open to the general public known motorcycles until then for their character.

Meanwhile, it is exactly the opposite way that follows BMW in recent years, obsessed with the rejuvenation of an often too bourgeois judged range by a clientele in search of emotions and sportsmanship: in addition to S1000R, real keypad in the pond of European and Japanese sports roadsters, the new generation of air and water cooled boxer engine follows undeniably this current.

Thus, the BMW R1200R 2015 has more nothing in common with the Classic roadster tested in 2011. With its new twin 125 horsepower in free version, much more aggressive styling and even the disappearance of the famous Telelever, it is a page that turns to ‘traditional’ brand enthusiasts, and another which opens on a radical course change. So much so that those would have been barely oppose yesterday, despite opposing paths today eventually join, to our surprise, but above all, our pleasure barely concealed… We are talking here of roadsters road and sporting high-end, which these R1200R and Monster 1200 today are the best references chromed. Action! 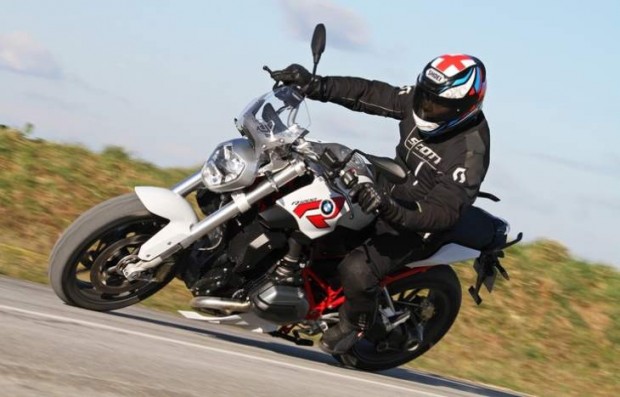 Their reconciliation is already in their corporate signature. Executive mesh steel painted red, twins visually very present, temperaments affirmed: nothing that static, our two bikes already assert their character. We like or not, but at least they stand!

The modernized line of Monster – same – remains a reference while the engine architecture of the R1200R leaves no doubt about its German origins. It takes full eardrums also on each side, with very worked sounds. The Monster 1200 is the sound of the two, the more cavernous and melodic also shows. In fact, although it is now far from the atmosphere “compete 2CV” of older generations, of the BMW flat twin remains less exhilarating than the Ducati when you play the handle, motorcycle béquillée on the side.

Side home on board, the differences themselves really. We are always more ‘in’ the Ducati and “on” the BMW, but when there is change. The Monster is also typed by the past: its saddle is more comfortable, the legs are less folded. Been preserved despite all this printing directly to the front wheel axle via a very wide handlebar that requires small templates to stick against the tank. 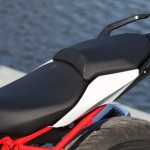 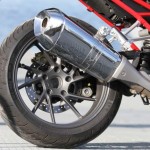 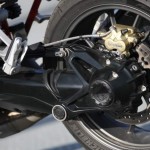 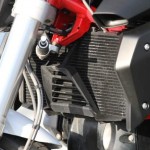 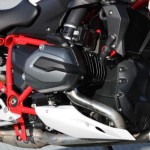 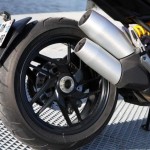 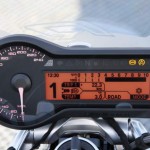 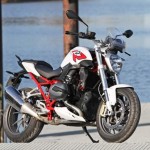 BMW is still more relaxed, but its ergonomics turns out to be a bit strange: the handlebars high and wide way trail cohabits with frankly identified footrests which impose much folding legs. Note that the R1200RS, based on the same platform, has lowered turntables.

By moving the two engine machines cut, we find that the Monster has taken a bunch of pounds becoming 1200: 215.6 kg all full facts about our balance, or 26.6 kilograms more than the 1100 Evo, which was the law until then in the range of Italian until liquid engines the brutally revokes!

The BMW, them, engineers have managed to contain the weight of the R1200R despite the arrival of the mixed cooling: 231.4 kg for the 15 R1200R against 237 kg for the R1200R Classic, more opulent, it is true. Or almost 16 kg to the theoretical of the Monster, even though advantage the center of gravity of the BMW conditioned by its engine more low will say, very soon! 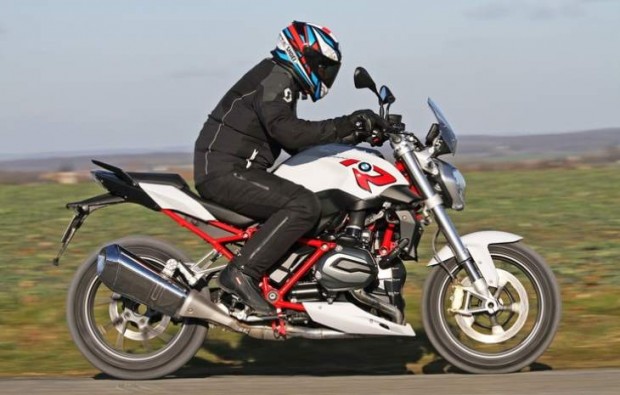 We compare the facilities and dashboards with Mehdi and we discover the presence of alerts to the ice storm of share and other: Ice on the Ducati logo, stylized snowflake on the BMW. These two lights go not any taxiing off! Go, it’s time to take off.

And at the outset, we note that Ducati has worked on the ease of getting started with big Monster. Certainly, there are dealing with a powerful 1200 to reactive ultra-electronic throttle handle, but with some attention, she be guided almost as easily as the BMW.

This last, softer at the opening of the gas, offers a “pure butter” clutch control and ergonomics that invites to a relaxed and senatorial, driving straight bust to see without twisting the neck into the circulation.

Turn-around are still not the cup of tea of the Ducati while its selection mellows when the engine is hot, but still firmer than the BMW. And need to play more frequently the switch, because the Testastretta 11 ° appreciates little low rpm.

Flat, for its part, accepts neighbouring regimes of 2 000 rpm on the above reports. Moreover, with somewhat usual, the shifter down to limit the fits and starts of the card an shaft to the climb and descent speeds. A real improvement on the R1200RT 2014 system.

In addition, the neophytes of the flat twin will probably not baffled by the famous couple of reversal, it virtually disappeared… probably to not destabilize the conquest customer. Ultimately if the BMW proves to be more conciliatory to the daily, the Ducati is very far from being a punishment.

The Desmo Blows the Storm

Well been prices taken in hands, so let’s take the road with our divas of the day. Without delay, the Ducati Monster 1200 invites to open big, revealing its performance, and above all, his character! : This twin sows the storm at each opening of the gas!

The accelerations are ultra sound, muscular, slightly vibrating. Not linear for two, and the strong tire monster on our hands! Kind a like an Aprilia Dorsoduro 1.2 in heartier… With the Ducati, there constantly want to play with the right handle, history to a flock of NAGs in the butt!

More watered down – it, expected a little – the BMW yet provides excellent performance with a lively engine, more than that of the Ducati, and a filling impressive. Very quickly, the mass is said: because of its lack of flexibility at the bottom of a slight hollow at midrange and a clamping penalizing in high revs, the Ducati can fight in times. 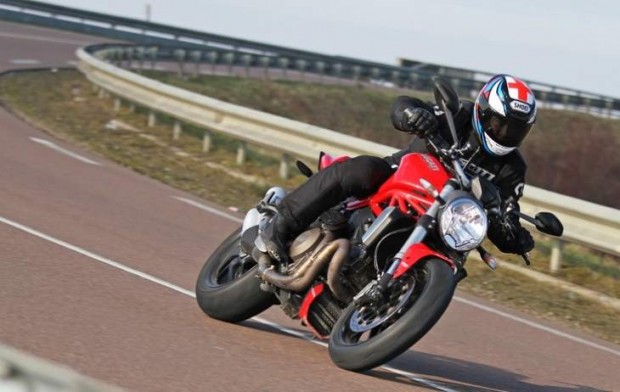 As soon as it “opens” concert at steady speed, the amazing R1200R hand always before and it is not even certain that gives change in free version. More discreet, the German boxer has two faces: soft and velvety to cruiser in real life or very bright for stock age in times as to the acceleration, away from it all. Efficient, always, but less exhilarating than the block made in Bologna. Question of sensations.

Arrived on our preferred course, we wrap the turns and the Ducati confirms impressions very mixed that we had left the Monster 821. Stiff chassis, the Italian seems poorly granted. That will not correct the settings of this standard version, for the less limited.

It requires arms and thighs to reach the rope, as if the (too?) big rear tire always sought to straighten the bike tilts easily to the initiation of the turn. To maintain its trajectory on the angle, it takes a lot to get involved.

In addition, the geometry is not the most comfortable: If you take a shock in the front train in turn, it is reflected sharply in the handlebar, or even the entire bike. No doubt the design of the part-cycle inspired by that Panigale frame mesh and back loop bolted to the cylinder heads causes rigidity too responsive and communicative. 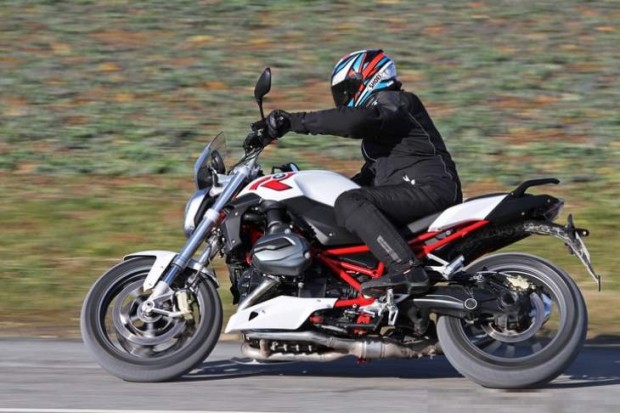 Pity because, in addition, the cornering stability and maintenance of cap are very good, dosed and powerful braking than the BMW, and the accuracy to drive the Monster when it is not too inclined also better than the Bavarian.

Heavier, the BMW is More Agile

The BMW R1200R, yet more heavy on the balance Bike-Station, immediately clears its overweight thanks to its natural weight distribution and the low center of gravity characteristic of engines flat. It was nice to say, this architecture is often sovereign in the winding.

And this is the BMW R1200R is played constantly winding paths, swallowing the pafs with disconcerting efficiency pifs and behaving rather honorably on bumps. With a pneumatic monte sportier than the Michelin Pilot Road 4 of series, it should put in many more sports in the winding.

Then, of course, the disappearance of the train before Telelever is sometimes regret: motorcycle plunges into taking the brakes – nothing sharply at the beginning of race – and loses in comfort and neutrality on the bumpy roads. Nevertheless, the feeling of permanent efficiency dominates and especially, the ease and efficiency report is far superior to what offers the Ducati. 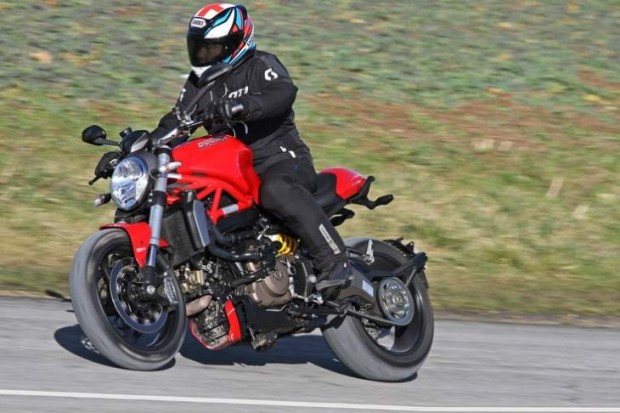 The comfort of driving, also remains to the advantage of the BMW R1200R combination of ergonomics, the pretty soft saddle and less dry suspensions. For the duo Sunday getaway, the Teutonic spare more vertebrae. 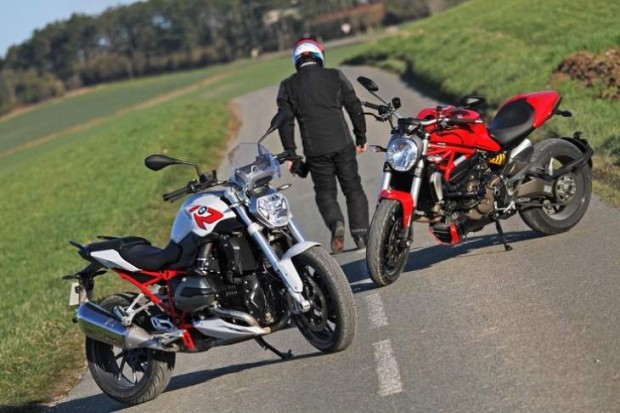 If the Monster is increasingly respectable over the developments, it has unfortunately? swapped a portion of lightness against a larger Cavalry in free version.

It remains a monster of sensations, and this is a fundamental quality for a sports roadster. It shows for even less efficient than the new BMW R1200R. Easier to drive, and then to fly, the German is also more comfortable and efficient most of the time.

On the side of price, it is also high in both cases: count €13 490 for the Ducati and €13 400 for the BMW. Knowing that once equipped with its various options packs, the German will increase €1 000 on average.

Here are some comparative images of Ducati Monster vs BMW R1200R 1200 Motorcycles in gallery. 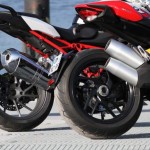 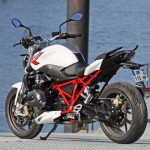 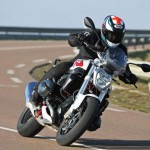 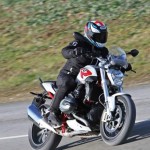 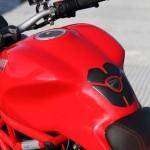 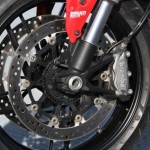 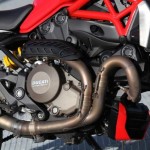 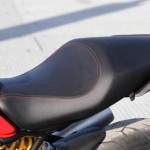 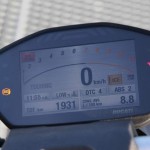 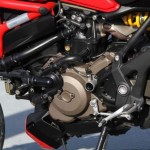 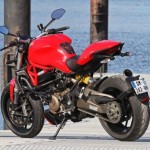 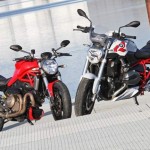